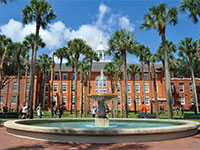 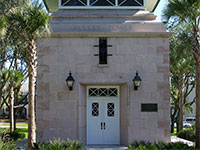 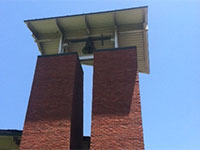 One of the older buildings on campus, Elizabeth Hall is also said to be haunted. Students studying late at night on the top floor often report hearing sounds from the attic. It is also rumored that Elizabeth Hall is the building where the Senior Week committee first meets.

On a campus as beautiful as Stetson University's, it's hard to point out all the amazing features. However, one of the highlights of the DeLand campus is Holler Fountain. The fountain is a common meeting spot and place of reflection for students. Holler Fountain is also part of many traditions. Those receiving their University Ring traditionally dunk the ring in the fountain when they first wear it. It's said that if first-time ring wearers don't dunk the ring, they will lose the ring and never graduate! Though not officially endorsed by the university, students have also been known to throw their friends in the fountain on their birthday...

Completed in 1934, the 116-foot Hulley Tower originally contained an 11-bell carillon, and a mausoleum for Stetson's second president, Lincoln Hulley, and his wife Eloise. Hulley served as president for 30 years (1904-34), and he and his family built the tower as a gift to the university. He died before it was finished. Unfortunately, the infrastructure of the tower and bells was compromised by weather damage. Citing safety reasons, university officials in 2005 made the decision to dismantle the upper part of the structure, leaving the mausoleum intact. Hulley Tower is said to be haunted. Students say that if you hit the bell on the backside of the tower before a test, you will perform better. Hulley Tower is also said to be the meeting location of Stetson University's secret society. Not much is known about the group, its recruiting practices or its service on campus. Maybe you'll be tapped to join!

The Victory Bell is, obviously, a bell that is housed in a tower connected to the Hollis Center. Donated by the Hollis family, the bell signifies Stetson University's drive to victory and features the phrase, "Victory comes from doing your best" emblazoned on the side. The university seeks success and victory academically, through service, on the court or field, and in living its values every day. The bell is only rung at special moments in the year, and it is considered an honor to actually pull the rope that rings the bell. Among other celebrations, the Victory Bell rings after Convocation, after Commencement, each night of Senior Week, and when the football team wins a game. Maybe you will be selected to ring the bell someday!