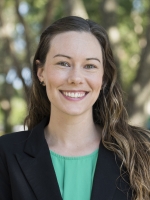 Lindsey Carelli is the university's associate director for interfaith initiatives. In this position, she directs interfaith programming, supports religious and non-religious student organizations and works with the University Chaplains to advance spiritual awareness at Stetson. Additionally, she facilitates educational and experiential opportunities to engage students and community members in contemplative practices, such as dialogue, meditation and yoga.

Lindsey holds a Master of Theological Studies degree from Brite Divinity School in Fort Worth, Tex. and a BA in Religious Studies from The University of Oklahoma, Norman, Okla. 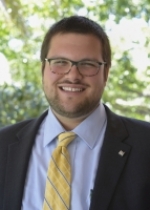 Sam is the inaugural Hillel Director at Stetson University. After graduating with a degree in religious ethics from Florida State University, Sam went to work in the Israel & Global Initiatives Department of the Jewish Federation of Palm Beach County. In that role, Sam oversaw all Jewish peoplehood initiatives, Israel education and engagement, and international delegations and travel. After four years at Federation, Sam was recruited to help restart Central Florida Hillel (based at the University of Central Florida), first as the director of community relations and then as the assistant director. During Sam's tenure at Hillel, he oversaw an increase in Jewish student engagement by 400%, Birthright participation grow by 275%, and his own passion for Jewish campus life grow into a lifelong commitment to Hillel.

As the first director of Hillel at Stetson, Sam is excited to build a thriving and sustainable Jewish community on campus and to see Stetson become a destination school for Jewish students around the country. During the day, you can find Sam drinking coffee with students, recruiting future Jewish Hatters, engaging with parents, alumni and major donors, helping the Hillel student board plan upcoming holidays and programs or just spending time on campus with his brindle dog, Renegade. 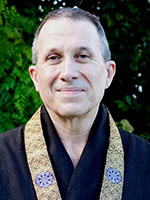 Sensei Morris began studying Zen Buddhism as a college student in the 1970s. His first ordination was as a Theravada monk in the Thai tradition, where he studied Vipassana meditation. He later trained with Bright Dawn Center for Oneness Buddhism, a non-sectarian organization based on Japanese Mahayana Buddhism, becoming a Sensei (minister/dharma teacher) in 2010.

He is a certified facilitator in Path of Freedom, the Prison Mindfulness Institute's mindfulness-based emotional intelligence program, and has a certificate in Methods of Japanese Psychology from the ToDo Institute. In 2012, Sensei Morris published his first dharma book, Wisdom; Compassion; Serenity: First Steps on the Buddhist Path.

Along with his Buddhist activities, Sensei Morris teaches tai chi and other group exercise at the DeLand and Four Townes YMCAs and is the founding director of the Florida Taijiquan Association. He lives in DeLand with his wife, Michelle, dog Lola, cat Nefertiti, and ferret Pandora. His son James lives in Austin, Texas.

Pastor Pressley is a credentialed minister with the Church of God, Cleveland, TN and serves as the Executive Pastor at Tabernacle of Praise in DeLand, FL. His roles include preaching, teaching, mentoring, and counseling students. Before coming to DeLand, Pastor Pressley served on staff at several churches in Jacksonville, FL. He graduated in 2015 from Daytona State College in the Emerging Leaders Institute with a minor in Public Relations. He is also the Director of Public Works for the City of DeLand.

In 2018, Pastor Pressley was appointed as the Northern Evangelism Regional Director by the Church of God Florida Executive Office. This role includes the coordination of church plants, church revitalization, community outreach, and revivals. Pastor Pressley has received recognition for his work from the Daytona News Journal as a 2019 “40 under 40” Outstanding Young Professional, the NAACP as the 2017 “Difference Maker of Year” for West Volusia County, and as a newly elected member of the Board of Directors for the West Volusia Branch of the YMCA.

He currently resides in DeLand, FL with his wife, Monica, and four children.