Yohann C. Ripert is Assistant Professor of French and Francophone Studies in the Department of World Languages and Cultures as well as a Faculty in the Honors Program at Stetson University. 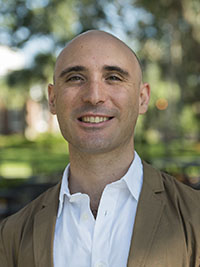 Committed to public service, Ripert also worked as a translator and interpreter for the United Nations Permanent Forum on Indigenous Issues from 2013 to 2016, was an International Fellow at Columbia's School of International and Public Affairs and a French-American Next Generation fellow at the Consulate of France in New York. In addition to his academic career, Ripert is a concert pianist and graduate of The Juilliard School. He has appeared as a soloist with the Manhattan Chamber Orchestra, the Juilliard Lab Orchestra, the New Juilliard Ensemble and as a chamber musician in prominent festivals such as Focus!, ChamberFest and Kneisel Hall. A champion of Spanish music, Ripert has performed the entire Iberia cycle by Albeniz as well as the complete piano music by Manuel De Falla throughout the United States, Europe and Asia.