Timothy Peter has been the director of many successful choruses that travel around the country. 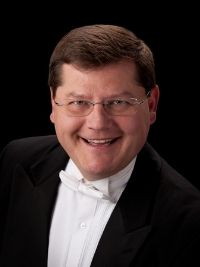 Timothy Peter is a professor of music at Stetson University. He is a native of Minnesota, received his undergraduate degree from Luther College and completed his doctorate of musical arts degree at the University of Arizona. Before coming to Stetson University, he was professor of music at Luther College and served as the head of the music department. He has been a high school choral director and church musician in Minnesota, Iowa, Arizona and Florida. Having joined the faculty of the Stetson University School of Music in the fall of 2012, Peter conducts the Stetson Concert Choir, which is the university's touring SATB ensemble, comprised of select upper-class singers.

Peter is involved in the American Choral Directors Association, having held positions as the divisional chair for repertoire and standards for college and universities and the state and divisional chair for men's choirs. His choirs have been selected to perform at the 2017 National ACDA Conference in Minneapolis and the 2011 National ACDA Conference in Chicago and at four Divisional NC-ACDA conventions held in Minneapolis, Minn., Sioux Falls, S.D. and Madison, Wis. He was a presenter at the 2015 National ACDA Conference in Salt Lake City, UT. His off-campus teaching, adjudicating and conducting includes numerous appearances as an all-state conductor and festival clinician in Alabama, Alaska, Arizona, California, Colorado, Florida, Georgia, Illinois, Iowa, Minnesota, Missouri, Nebraska, Nevada, New York, North Carolina, North Dakota, Oklahoma, South Dakota, Texas, Virginia and Wisconsin.

Peter has prepared choirs and orchestras for performances at Carnegie Hall in Manhattan, Singapore SAS Concert Hall, Orchestra Hall in Minneapolis, Orchestra Hall and Rockefeller Chapel in Chicago, the Georgia Dome in Atlanta, the Holland Center in Omaha, the TWA Center in St. Louis, the Overture Center in Madison, the Alamodome in San Antonio and the Seoul Foreign School Center for the Performing Arts. He has also conducted in Singapore, Germany, England, Namibia, Oman, South Africa and South Korea.