I believe that while one can learn a piece of music and the tools necessary for a successful performance, we must realize that we are human, and mistakes are possible. My students learn that while a performance with no mistakes is desired by all musicians, one does not require every note to be perfect in order to give a musically pleasing performance. Each student will strive to give the best musical performance possible through good tone production, thorough knowledge of musical phrasing, appropriate style and character according to the time period, and the use of each individual's own musical ideas and past musical experiences. Students will naturally strive for the best achievement in all aspects but will not become an inflexible player who can play everything written on the page with no individual ideas, heart or musicality. 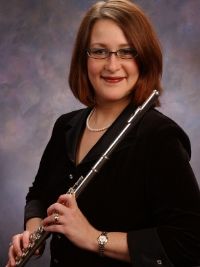 Phillips is a founding member of the baroque flute ensemble, Traverso Colore, comprised of past and present students from the Florida State University. An avid baroque flute player, Phillips was awarded 3rd Place in the 2009 National Flute Association Baroque Flute Artist Competition during the convention in New York City, and was awarded a performer's spot in the 2017 National Flute Association Baroque Flute Masterclass Competition, in which she performed for master teacher Jed Wentz during the convention in Minneapolis.

As a member of Traverso Colore, Phillips, along with her colleagues, has created several transcriptions of famous renaissance and baroque era pieces for the ensemble. The baroque flute ensemble genre, with its limited amount of repertoire, was a catalyst to begin a Traverso Colore Transcription Series, published by Alry Publications in 2019, in hopes that this will encourage other baroque flutists to explore new repertoire. Phillips has created transcriptions for many pieces, including Corelli's Christmas Concerto, Handel's Arrival of the Queen of Sheba, and Vivaldi's "Spring" movement from the Four Seasons. Volume 3 of the Traverso Colore Series was selected as a finalist in the 2020 National Flute Association Newly Published Music Competition. The members of Traverso Colore met in June of 2018 to record several pieces from the transcription series, and will be releasing a CD in later in 2020.

In addition to teaching at Stetson, Phillips has also served for many years on the board of the Florida Flute Association (FFA) as Program Chair, Vice-President, and President. Having completed her term as President of the FFA in January 2020, she is now serving as the Chair of the Board.

Phillips maintains an active performing and teaching career in central Florida. She regularly serves as a judge for FBA events such as All-County and All-State auditions and State Solo and Ensemble festival. In addition, she is often called as a substitute musician with the Orlando Philharmonic Orchestra.