Stephanie Sauer is a writer, interdisciplinary artist, and publisher. Her publications include Almonds Are Members of the Peach Family (Noemi Press) and The Accidental Archives of the Royal Chicano Air Force (University of Texas Press). 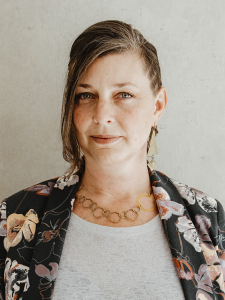 Stephanie Sauer is an author, interdisciplinary artist, and publisher. Her most recent book, Almonds Are Members of the Peach Family, was awarded the Noemi Press Book Prize in Prose and named one of the best books of 2019 by both Entropy and Big Other. Her debut, The Accidental Archives of the Royal Chicano Air Force, was the first artist book of its kind to be published by the University of Texas Press and is featured in City Lights Bookstore's Pedagogies of Resistance Recommended Reading List.

Sauer's work has earned the Barbara Deming Memorial Award for Nonfiction and So to Speak Hybrid Book Award, as well as fellowships from Yaddo, Kimmel Harding Nelson Center for the Arts, Mirante Xique-Xique, Americans for the Arts, and Sacramento Metropolitan Arts Commission. Her essays and poetry have appeared in Pleiades, Gulf Coast, Drunken Boat, Asymptote, Grain, Verse Daily, and Lavender Review, and her artist books have been exhibited at the De Young Museum, Chicago Cultural Center, and National Library of Baghdad. She has performed her work widely at spaces that include Cornell University, Galeria de la Raza, ArtRio, and the &Now Festival of New Writing.

Sauer earned her MFA in Writing from the School of the Art Institute of Chicago, where her thesis manuscript was selected by US Inaugural Poet Elizabeth Alexander for the SAIC Writing Fellowship. She has taught writing and book arts at the San Francisco Art Institute and California State University's Summer Arts. In addition to teaching in Stetson's MFA of the Americas program, Sauer also serves as director of Lolmĕn Publications for the Shingle Springs Band of Miwok Indians and as a co-founding member of Praça, a national platform for small presses and artist publishers in Brazil.