My dedication to excellence in teaching runs deep, and I could not imagine doing anything else with my life. My Stetson students and colleagues tease me lightheartedly about my "Theory I" Florida license plate, but no amount of teasing could diminish the pride I feel as a music theorist, educator at Stetson University, and oboist. 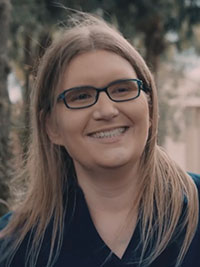 Shannon Groskreutz, PhD is a visiting assistant professor of music theory at Stetson University where she teaches and coordinates courses in music theory, musical style and analysis, aural training and functional keyboard. She has recently guided select music theory, musical style and analysis, and aural training courses through curriculum revisions, including a recent textbook change to the core theory curriculum: A Concise Introduction to Tonal Harmony by L. Poundie Burstein and Joseph N. Straus. While she was a graduate student in music theory at Florida State University, she taught music theory and aural training courses as the recipient of a Graduate Teaching Assistantship (2005-07), before being offered a full-time teaching position at Stetson University.

Additionally, Shannon fulfilled the requirements for Florida State University's College Teaching Certificate, awarded alongside her PhD in Music Theory. Shannon is a music reviewer for American Recorder, the Journal of the American Recorder Society. Her music review of Lance Eccles' On the Pavement, a four-movement recorder duet, was published in the Spring 2015 edition, and her music reviews of Rainer Lischka's Gut Aufgelegt (In a Good Mood), a collection of recorder duets, and Tanzlust (The Pleasure of Dancing), a collection of recorder trios, were published in the Fall 2014 edition. She has presented papers at the March 2007 Joint Meeting of the American Musicological Society South Central Chapter, Music Theory Southeast, and the Society for Ethnomusicology Southeast and Caribbean Chapter, in addition to the 24th Annual Music Theory Forum at Florida State University held in January 2007.