Sean Kennard has won top prizes in numerous international competitions and has performed recitals, chamber music, and as soloist with orchestras around the world. His recordings have been released by Naxos, Delos, and Centaur. He joined Stetson's faculty as coordinator of the piano division in 2017. 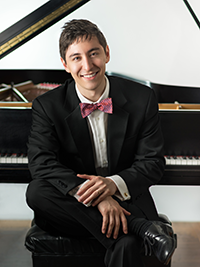 "America still produces superb pianists, and one is Sean Kennard," proclaimed Limelight Magazine in their rave review of Kennard's debut album. His "moving and musically satisfying [The Strad]" performances and recordings have been acclaimed all over the world for their "exceptional agility, nuance and power [Gramophone]," "powerful and involved music making [The Washington Post]," and "penetrating sense of structure...infectious sense of fun...full of life and sparkle [Fanfare]." Renowned pianist Richard Goode described Kennard as "an extraordinary pianist, one of the most gifted I have ever heard...a most natural and unaffected performer, who conveys a calm authority even while whipping up a storm," while American Record Guide has praised his "perfect blend of lyricism and romantic passion, huge romantic sound, and bold melodic vision."

Dr. Sean Kennard, a Steinway artist, is a graduate of the Curtis Institute of Music where he won the institution's prestigious Sergei Rachmaninoff Award, the Juilliard School, Mannes College, and Yale University having studied with teachers including Boris Berman, Richard Goode, Enrique Graf, Jerome Lowenthal, and Robert McDonald. He was named a Harvey Fellow of the Mustard Seed Foundation in 2014, and in 2017 joined the faculty of Stetson University as coordinator of the piano division in the School of Music. To hear Sean's recordings and for more info about his recent projects and upcoming performances, please visit his website. Watch Sean's videos on his official YouTube channel and connect with him on Instagram @seankennardpiano .