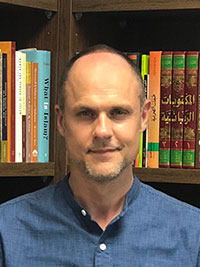 Sam Houston, PhD, is an assistant professor of religious studies at Stetson University. He earned a bachelor of arts degree in history from Baylor University, a master of divinity degree from Princeton Theological Seminary and a master of arts degree in philosophy from Boston College. He earned his doctoral degree from Florida State University, specializing in Muslim ethics and comparative religious ethics.

Prior to pursuing his doctorate, he lived for two years in Abu Dhabi, UAE, teaching English at Zayed University and traveling throughout the Middle East/North Africa region. While a graduate student at FSU, he was awarded a U.S. State Department-sponsored Critical Language Scholarship to study Arabic in Morocco.

He is a member of the American Academy of Religion and the Society for the Study of Muslim Ethics. When not teaching bright Stetson students, he enjoys running, gardening and fly fishing.