My work is invested in the sonic, visual, tangible ties that connect us as human beings and how they inform and transform language. My work, experimental and performance based, is always reexamining history, both personal and global. 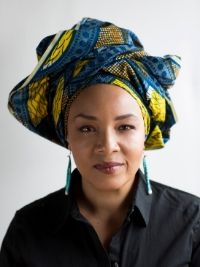 LaTasha N. Nevada Diggs is a poet and sound artist. Her multilingual work addresses themes of global inequality, displacement, and forced migration. Diggs's first full-length collection of poetry, TwERK, was published by Belladonna* in 2013. She self-published the chapbooks Ichi-Ban: from the files of muneca morena linda (MOH Press, 1998) and Ni-Ban: Villa Miseria (MOH Press, 2001), and the album, TelevisÃ­on (MOH Press, 2002).

Diggs has presented and performed at California Institute of the Arts, El Museo del Barrio, The Museum of Modern Art, and Walker Art Center and at festivals including: Explore the North Festival, Leeuwarden, Netherlands; Hekayeh Festival, Abu Dhabi; International Poetry Festival of Copenhagen; Poesiefestival, Berlin; and the 2015 Venice Biennale.

Diggs has received a 2020 C.D. Wright Award for Poetry from the Foundation for Contemporary Arts, a Whiting Award (2016) and a National Endowment for the Arts Literature Fellowship (2015), as well as grants and fellowships from Cave Canem, Creative Capital, New York Foundation for the Arts, and the U.S.-Japan Friendship Commission, among others.