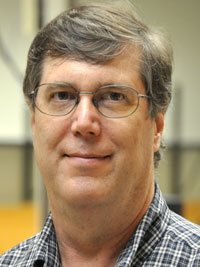 Kevin Riggs specializes in research on magnetic materials useful for magnetic recording and information storage. His most recent work has been based on a technique called magnetic force microscopy (a relative of atomic force microscopy) that enables the direct imaging of microscopic magnetic patterns. He also has an active research program using laser-based holographic techniques to image the vibration patterns of various musical instruments.

Riggs teaches several courses in the physics department, including many of the advanced courses for physics majors. However, he especially enjoys interacting with students from a wide range of backgrounds in both his general education course on musical acoustics titled the Science of Music and his freshman seminar course titled Energy and the Environment. In his spare time, Riggs enjoys playing guitar in a Stetson faculty jazz quintet called Thin Film Magnetism.