Dr. Lynch not only has an extensive background in physics but also has experience in a lab researching biological cells. After finishing her PhD, she went on to conduct postdoctoral research at the University of Pittsburgh. 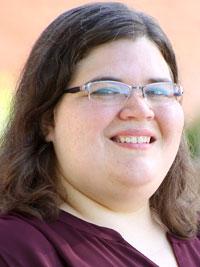 Holley Lynch received her PhD in physics from Vanderbilt University and worked as a postdoctoral researcher in bioengineering at the University of Pittsburgh. She enjoys teaching and researching the physics of tissue migration. She finds the mechanics of biological tissues particularly interesting because they are a unique material: not quite a solid or a liquid and self-propelled.

In addition, determining the basic mechanics of tissue migration will help inform efforts to engineer organs and to create therapies that deter cancer metastasis. Lynch's research involves both "wet" work with cells and computational work to automate data analysis and compare experimental data with physical models. She looks forward to working with students interested in conducting research at the interfaces between biology and physics and between experiment and theory.