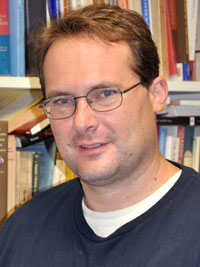 Eric Kurlander, PhD, is the William R. Kenan Jr. Professor of Modern European History at Stetson University. Kurlander earned his BA at Bowdoin College and his MA and PhD at Harvard University, teaching three years at Harvard before coming to Stetson in 2001. He offers courses on Modern German, European, and World History. His recent monograph, Hitler's Monsters: A Supernatural History of the Third Reich (Yale, 2017), offers the first comprehensive study of the supernatural in Nazi Germany, illustrating how the Third Reich drew upon a wide variety of occult practices, esoteric sciences and pagan religious ideas to gain power, shape propaganda and policy, and pursue their dreams of racial utopia and empire. The book has been reviewed positively in the Washington Post, Times of London, Der Spiegel, and the National Review, as well as other prominent periodicals in the United States, Canada, Great Britain, Germany, France, and Italy. The book has recently appeared in paperback and been translated into Italian, Polish, Czech, Croatian, and Estonian (with Chinese and Russian editions appearing next year).

Kurlander's other books include two edited volumes, Revisiting the ‘Nazi Occult': Histories, Realities, Legacies, co-edited with Monica Black (Camden House, 2015) and Transcultural Encounters between Germany and India: Kindred Spirits in the 19th and 20th Centuries, co-edited with Joanne Miyang Cho and Douglas McGetchin (Routledge, 2014). His second monograph, Living With Hitler: Liberal Democrats in the Third Reich (Yale University Press, 2009), illuminates the ways in which German liberals negotiated, resisted, and in some ways accommodated the Third Reich. His first book, The Price of Exclusion: Ethnicity, National Identity, and the Decline of German Liberalism, 1898-1933, appeared in 2006. He has published articles in leading journals, including Central European History, German History, and The Journal of Contemporary History, and held research and writing fellowships from the Fulbright Foundation; Alexander von Humboldt Foundation; the German Historical Institute; the German Academic Exchange Service; the Krupp Foundation; and Harvard University's Program for the Study of Germany and Europe.

At Stetson, Kurlander has received the William Hugh McInery Award for Excellence in Teaching, the Hand Award for Excellence in Research and Creative Activity, and contributed to the university in numerous leadership roles. He has served as Chair of the History Department, Chair of the Sociology and Anthropology Department, Chair of the Professional Development Committee, Chair of the Arts & Sciences Tenure and Promotion Committee, and Chair of the Faculty Finance and Budget Committee as well as multiple terms on the Faculty Senate. His current projects include a textbook, Modern Germany: A Global History (under contract with Oxford University Press) and a monograph, Before the Final Solution: A Global History of the Nazi “Jewish Question”. In his free time, Kurlander enjoys parenting, reading, travel, sports, and popular culture.