As a native from Germany, not only has Dr. Poeter studied all around the country but all around the world. Some of her educational travels include California, Spain and her home country of Germany. 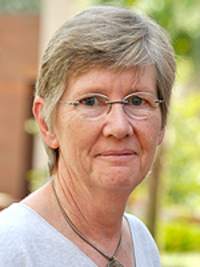 Elisabeth Poeter, PhD, a native of Germany, came to the U.S. in 1975. She began her second educational career at Sacramento City College where she discovered her interest in foreign language and literature studies.

Poeter spent one year at the University of Barcelona as part of her undergraduate studies in Spanish before completing her final degree in German Studies at the University of California at Berkeley. She taught at U.C. Berkeley, Mills College and Bucknell University before joining the Stetson University faculty in the Department of World Languages and Cultures in 1995. During her tenure at Stetson University, she spent one year at the Pädagogische Hochschule (University of Education) in Freiburg, Germany where she taught courses on German women's literature and literature for children and young adults.

At Stetson University, she serves as director of the Gender Studies Program and as co-director of the university's summer program in Freiburg, Germany. She has been the recipient of the Jane Heman Language Professor Stipend and the William Hugh McEniry Award for Excellence in Teaching.