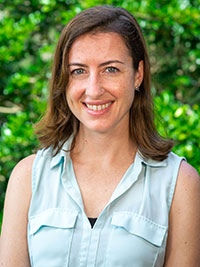 Corie Charpentier, PhD, is a marine biologist who pursues research in the ecology and physiology of coastal animals. Prior to her arrival at Stetson, she taught courses in biology and marine science at Ransom Everglades School. She is enthusiastic about science education and strives to provide opportunities for Stetson students and the community to engage with marine life, biology, and the scientific process.

Corie Charpentier, PhD, grew up exploring the rocky shores of New England and discovered her passion for marine science at an early age. Since, she completed a BS in Marine Science from Eckerd College and a PhD in Marine Biosciences from the University of Delaware. During her PhD, Charpentier studied predator-induced defenses in crustacean zooplankton. She also contributed to research on the visual physiology of krill during Arctic polar night. She then worked as a postdoctoral fellow at Rutgers University, where she investigated the impact of artificial light on coastal larvae in New Jersey and contributed to investigation of new technologies for efficient study of Antarctic trophic ecology. During her time as a PhD student and postdoctoral fellow, Charpentier also consistently engaged in environmental outreach and undergraduate mentorship. Just prior to her arrival at Stetson, she taught biology and marine science courses at Ransom Everglades School. Looki ng forward, Charpentier aims to share her for passion for marine science and the natural world through teaching, mentorship, and research at Stetson.