Chesya Burke is an Assistant Professor of English and U.S. Literatures. Having written and published over a hundred fiction pieces and articles within the genres of science fiction, fantasy, comics and horror, her academic research focuses primarily on the intersections of race, gender and genre. 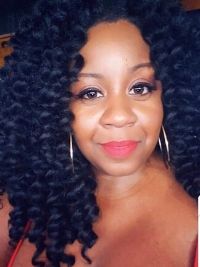 Chesya Burke is an Afrofuturist. She writes and studies Afrofuturism as a cultural movement that seeks to reclaim black identity through art, literature, and political resistance. Burke is the Co-Chair of Wiscon's Anti-Abuse Team, which is a national science fiction, feminist conference, and her story collection, Let's Play White, is being taught in universities around the world. Poet Nikki Giovanni compared her writing to that of Octavia Butler and Toni Morrison, and Samuel Delany called her "a formidable new master of the macabre." Burke's novel, The Strange Crimes of Little Africa has garnered critical acclaim by writers such as Tananarive Due and Kiese Laymon.