Alwin Franke is Assistant Professor of German in the Department of World Languages and Cultures at Stetson University. 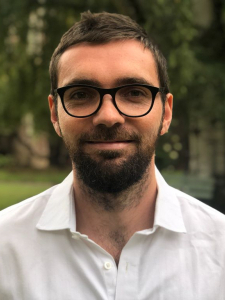 Trained in comparative literature, philosophy and history at Freie Universität Berlin, Alwin received his Ph.D. from Columbia University. He specializes in German literature and critical thought with particular focus on their epistemic contexts in the sciences, media and the social.

Alwin is currently working on a book project entitled "Sign, Value, Form: Crises of 'Darstellbarkeit' in Literature, Mathematics, and Political Economy, 1850-1950," which traces the emergence of new symbolic practices and the concomitant representational crises in the exchange between literature, mathematics and political economy from Karl Marx and Bernhard Riemann to Sigmund Freud and Robert Musil. In a second project, he explores how the conceptual triad milieu-environment-Umwelt has shaped, in a dialectic of cut and immersion, our ways of imagining the relationship between an organism and its surroundings at the intersection of the biological and the sociological.

Additionally, Alwin is interested in the global reception of German critical thought as well as the entanglement of philosophy and literature with racialized imaginaries from the 18th to the 21st century. He has published articles on the racial imaginary of German modernism and Leslie Marmon Silkos reception of Marx and Freud. He is currently editing and translating Gayatri Spivak's collected writings on Marx from English into German ("Spivak-Marx: Für eine globalisierte Politik des Lesens" ["Spivak-Marx: Toward a Globalized Politics of Reading"]). In a second editorship, tentatively titled "The Color of Difference," he is working on an English-language reader that revisits key texts from the German canon through the lens of postcolonial and critical race theory.

Inspired by his work for artist and filmmaker Hito Steyerl, Alwin is interested in developing new approaches that combine media theory with critical media practice in both teaching and research.