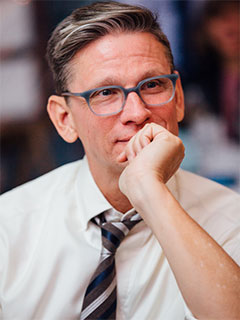 Charles A. “Chuck” Wolfe is CEO of The Chiles Group, which owns and manages three Gulf Coast restaurants, an organic farm, aquaculture businesses and myriad real estate holdings in Florida, all with a focus on sustainability. As CEO, Wolfe leads the executive team and directs the company’s efforts to broaden its strategic vision and develop new projects.

Before taking the helm of The Chiles Group in December 2018, Wolfe was a co-founder and partner of Wolfe/Kinkennon, a strategic planning and leadership consulting firm. His career includes an impressive 12-year run (2003-14) as CEO of Victory Fund, a national advocacy group supporting LGBTQ candidates. Under Wolfe’s stewardship, Victory Fund’s budget grew by 500 percent while 63 percent of the candidates it endorsed won their races for offices at all levels of government across the United States. Wolfe was twice named to OUT Magazine’s list of 50 most “powerful” LGBTQ Americans.

A native Floridian, Wolfe worked on political campaigns in his home state in the 1980s and ’90s. Only months after joining then-Florida Gov. Lawton Chiles’ administration as an aide in 1992, the 31-year-old Wolfe was tasked by the governor to lead the state’s relief efforts after Hurricane Andrew, a Category 5 Atlantic storm, had cut a swath of destruction across South Florida. Wolfe’s handling of the aid operation earned him a reputation for getting things done under difficult circumstances. Wolfe went on to become operations manager for Chiles’ 1994 re-election campaign, a successful stint that led him to run the logistics and financial management of Chiles’ inauguration.

Florida’s Truth Campaign became a template for other states combating teen smoking and its success propelled Wolfe to the position of executive vice president and chief operating officer of the newly created American Legacy Foundation in 1999. (The Washington, D.C.-based group changed its name to Truth Initiative in 2015.)

In the late 1980s, while still active with the Boy Scouts of America, Wolfe came out as gay and began advocating for an end to the Scouts’ discriminatory policies toward gays and lesbians. In 2001, he appeared on CBS News’ “60 Minutes” program in a segment titled “Boy Scouts: No Gays Allowed.” He was portrayed as an example of an “ideal Boy Scout” — until coming out as gay

Travel, hiking and horseback riding are among his favorite leisure activities.