Professor of Law and Director, Center for Excellence in Elder Law 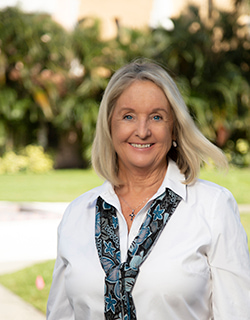 Roberta K. Flowers is a professor of law at Stetson University College of Law. Within the Elder Law LL.M. program, Professor Flowers teaches Ethics in an Elder Law Practice. She also teaches Evidence, Criminal Procedure, and Professional Responsibility. While at Stetson, Professor Flowers has successfully coached trial teams, arbitration teams, and moot court teams to national championships. She has served as the director of the Center for Excellence in Advocacy and as the William Reece Smith Jr. Distinguished Professor in Professionalism. During her time at Stetson, Professor Flowers has received the university-level Excellence in Teaching Award, Most Inspirational Teacher Award from the Student Bar Association, and an award from the Student Bar Association for supporting student life. She also has received the university-level Homer and Dolly Hand Award for Excellence in Scholarship, the Dean's Award for Extraordinary Service, and been awarded the Distinguished Service Award four times. In 2005, the Florida Supreme Court awarded Professor Flowers the Faculty Professionalism Award.

Professor Flowers has lectured worldwide on the topic of ethics. She won a Telly Award for Excellence in Educational Films for having produced a series of educational videos on the ethical issues faced by prosecuting attorneys. Along with Professor Rebecca Morgan, she created a video series used to train and educate attorneys nationwide on the ethical dilemmas faced by elder law attorneys. The Florida Supreme Court awarded Professor Morgan and Professor Flowers the Florida Supreme Court Professionalism Award for their video productions. Additionally, with Professor Morgan, Professor Flowers designed the nation's first "elder-friendly courtroom," which serves as a model for courtrooms of the future.

Before arriving at Stetson, Professor Flowers worked as a prosecutor in both the state and federal systems. She began her career in 1984 as a deputy district attorney for the 18th Judicial District of Colorado, where she served as a trial attorney in the criminal division. In 1989, she was appointed assistant U.S. attorney for the Southern District of Florida, where she served in the Appellate Division, the Major Crimes Unit, and the Public Corruption Unit.