We have a beautiful, Mediterranean Revival-style campus on 21 acres of lush tropical landscape just minutes from Florida’s Gulf Coast beaches.

Founded in 1900 as Florida's first law school, Stetson University College of Law has educated outstanding lawyers, judges and other leaders for more than a century. In 1954, the College moved from Stetson's main campus in DeLand to Gulfport, nestled in one of the 25 largest metropolitan areas in the United States. The College of Law opened a satellite campus in downtown Tampa in 2004.

Opened in January 1926, the Rolyat Hotel (Taylor spelled backwards) was built by "Handsome Jack" Taylor. It was a re-creation of a Spanish walled settlement of the feudal ages. The courtyard, or Plaza Mayor, featured a well and two large fountains, and was designed to be the meeting place for hotel guests. On opening night, the main fountain was filled with champagne.

The main entrance to the plaza is a reproduction of the entrance to the Old Alcantara Bridge in Toledo, Spain. Once adjacent to the hotel were stables and a golf course. Guests played a wide range of sports from tennis and croquet to Tarpon fishing. With its life cut short by the Great Depression, the Rolyat was open for only a few seasons. From 1932 until 1951, the hotel housed the Florida Military Academy.

Our History
Plaza Mayor Courtyard
The Gulfport campus was originally built as a 1920s luxury resort modeled after a Spanish walled settlement. Today, the magnificent Plaza Mayor Courtyard serves as a beautiful meeting place with palms, bamboo, jacaranda and hibiscus around the perimeter. 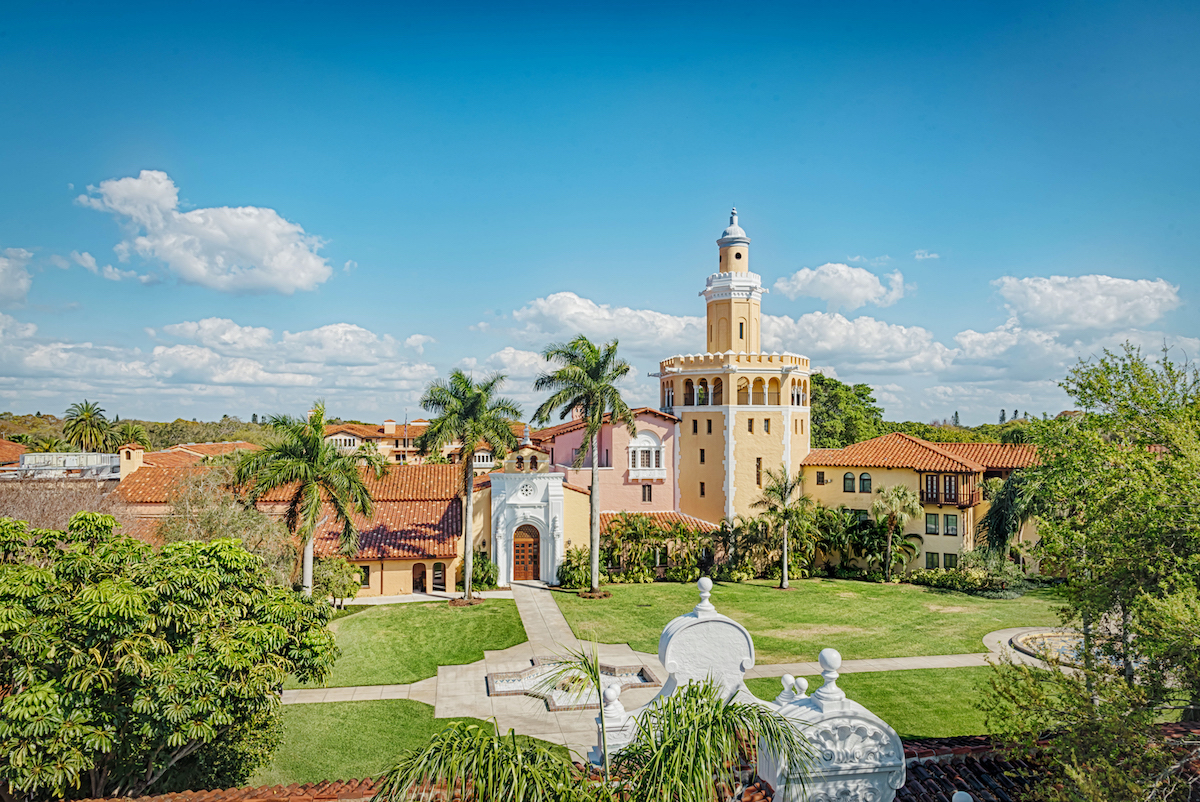 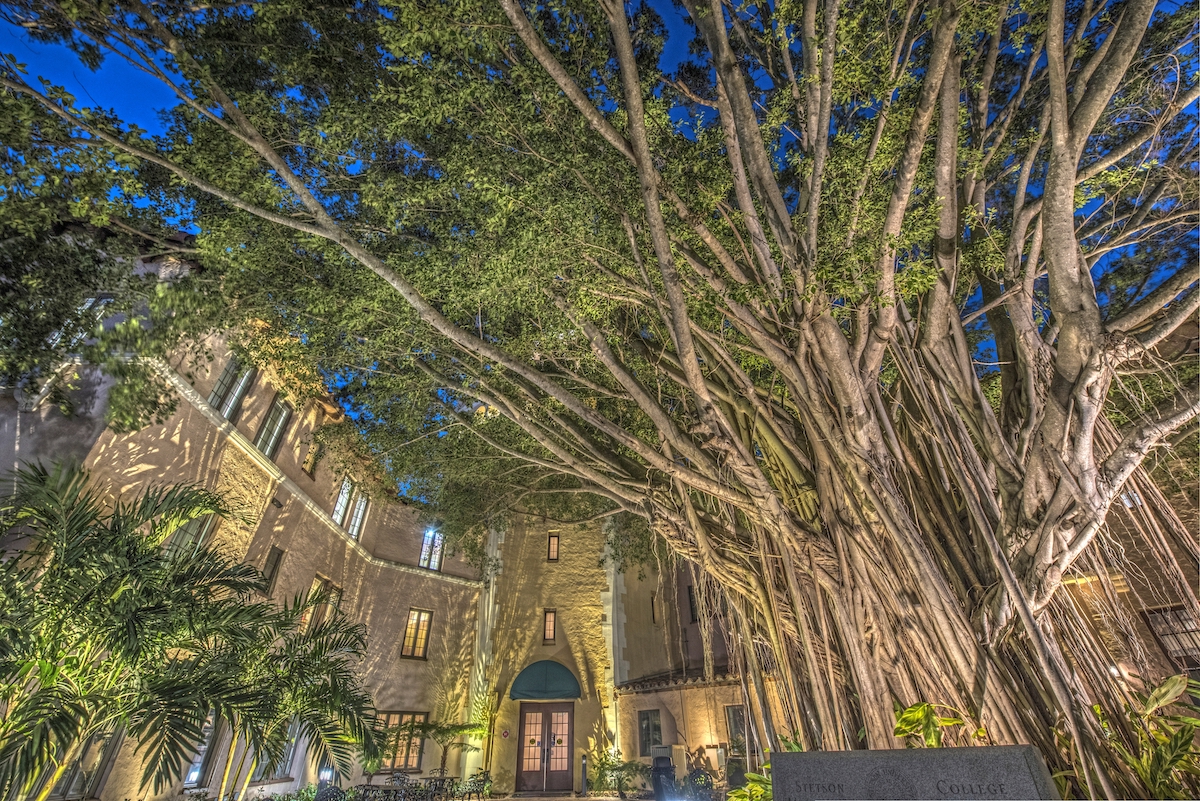 Banyan Courtyard
The Banyan Tree Courtyard provides a stately entrance on the south side of campus with elegant brick pavers and towering, majestic banyan trees bringing shade. The area is used for lounging and for special events year round. 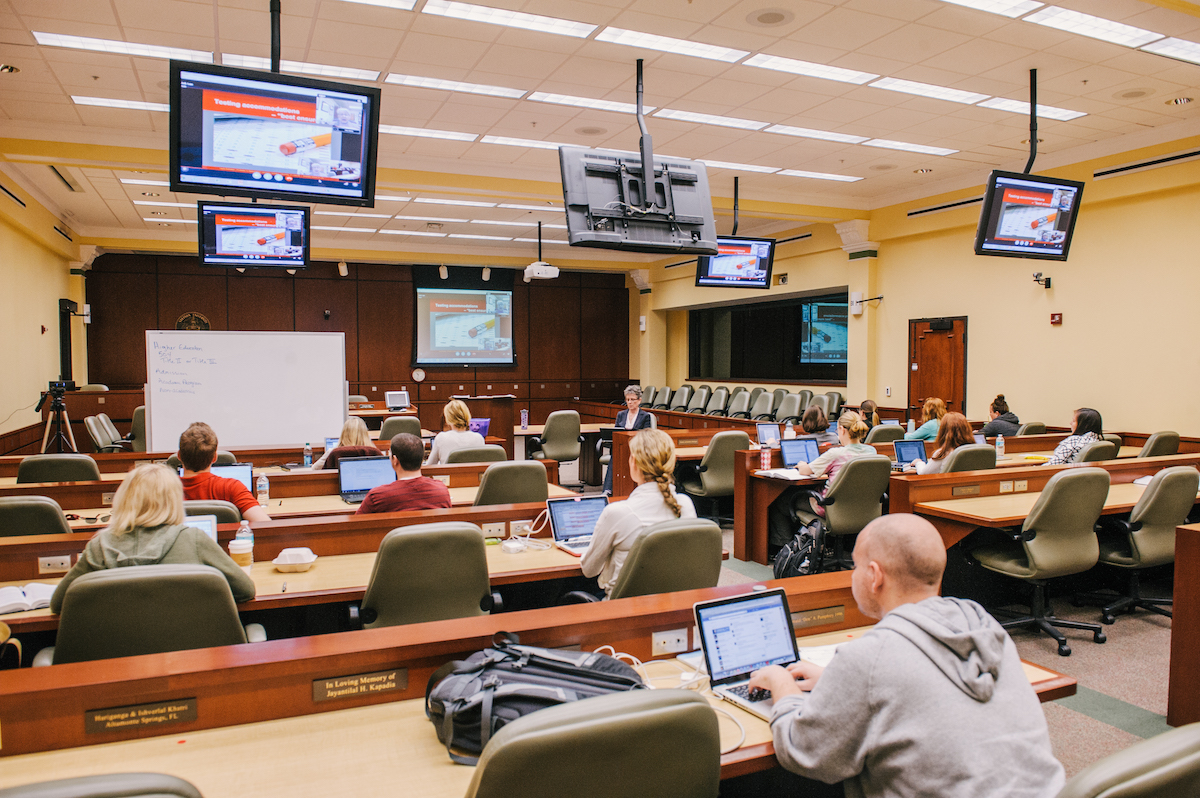 The Eleazer Courtroom is the first courtroom in the nation designed specifically to address the needs of people who are elderly or disabled.

The courtroom serves as a national model with every feature, from carpet to ceiling, designed to improve access. It also offers an array of advanced technology, including an electronic evidence display, cameras, microphones and speakers for observing court participants and jury deliberations.

The courtroom was dedicated in honor of Professor William R. Eleazer on Sept. 16, 2005. For 20 years, William R. Eleazer inspired and led a generation of trial lawyers and through his tireless efforts made Stetson the powerhouse in law school advocacy education that it is today. 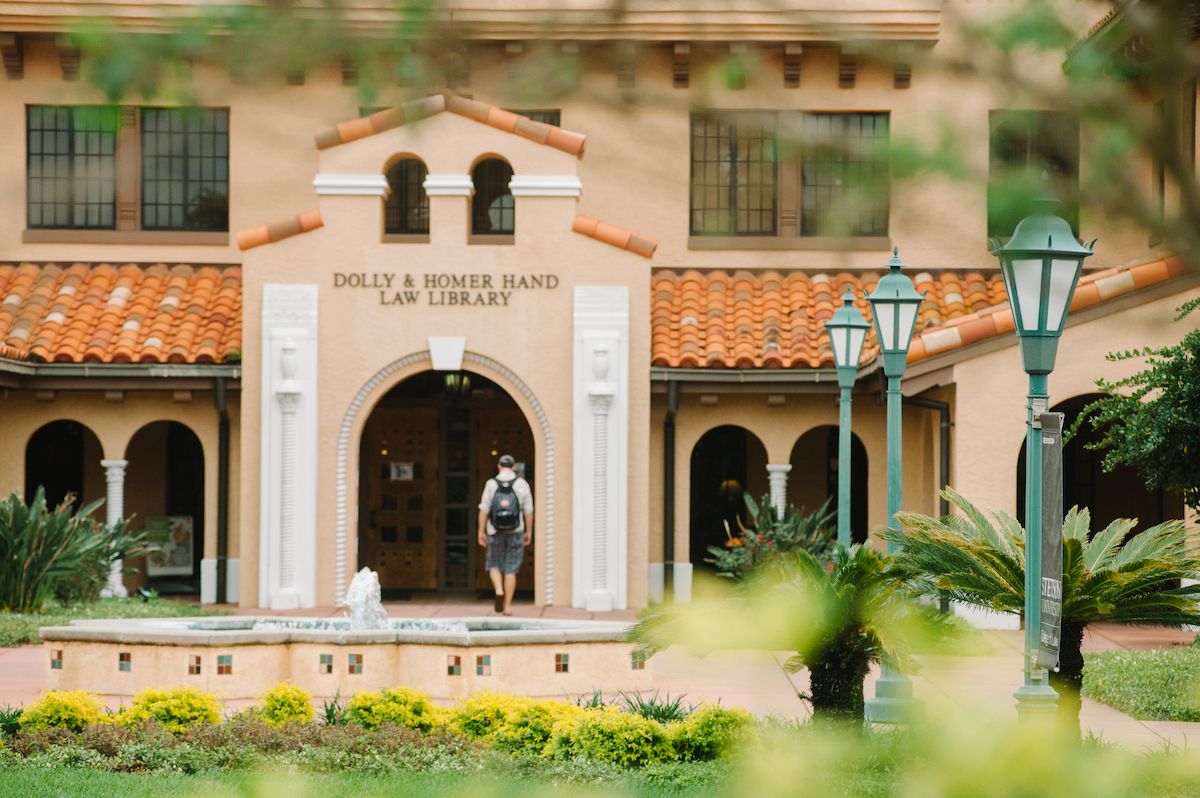 Dolly & Homer Hand Law Library
Dedicated in 1998 by U.S. Supreme Court Justice Ruth Bader Ginsburg, the Dolly and Homer Hand Law Library is the academic heart of the Gulfport campus and houses a collection of nearly 420,000 volumes.
The Great Hall
The Great Hall serves as the law school’s main event space. The room boasts a large, imposing fireplace and arched alcoves. Flags representing every U.S. state and territory line the walls, and a 17th century Flemish tapestry hangs over the foyer entrance.Across from the Great Hall is the Mann Lounge, which is used for student meetings and law school receptions. Both the Great Hall and the Mann Lounge are available for a limited number of private functions. 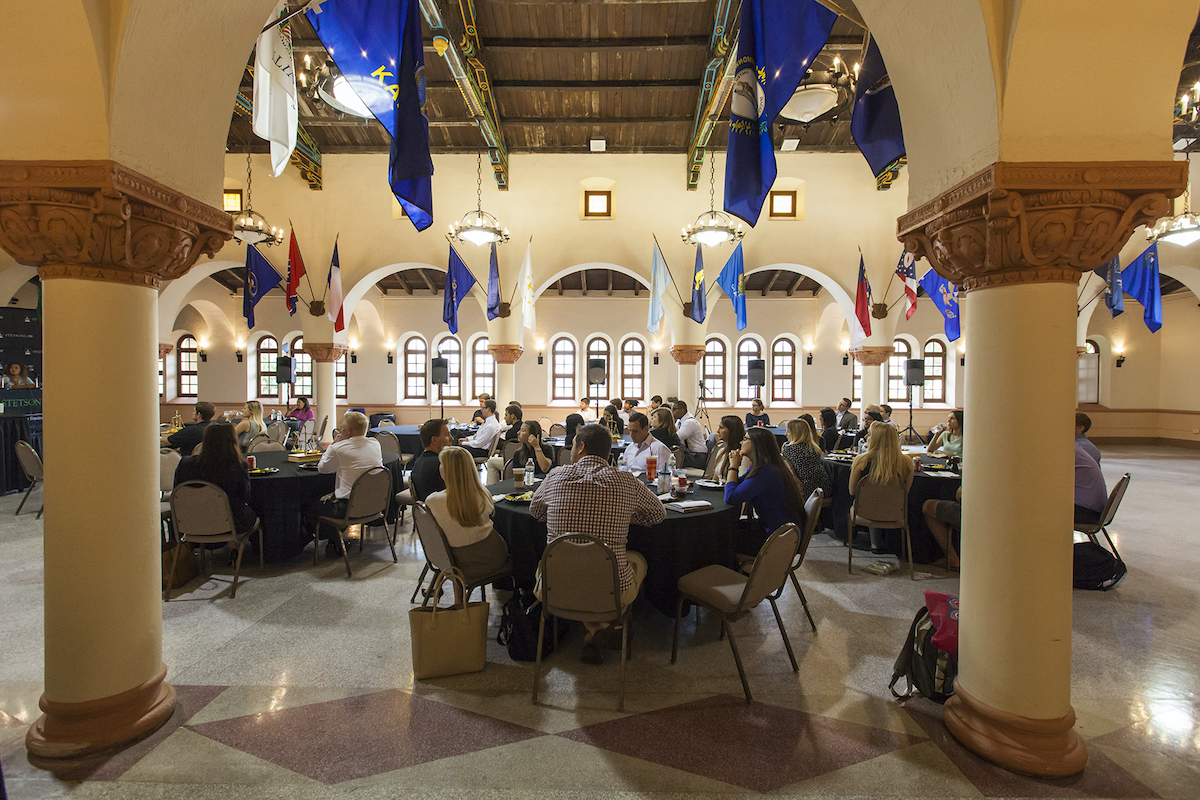 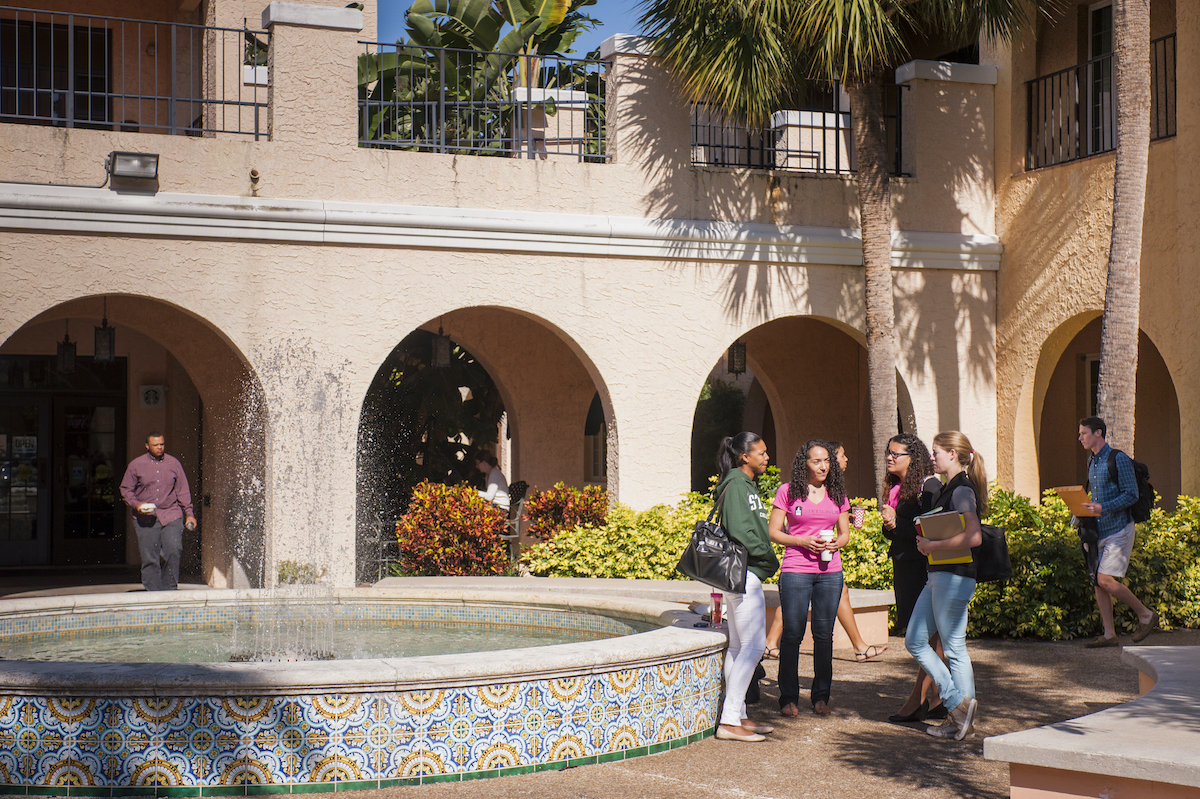 In the Mann Lounge are two Talaveras vases (named for the Spanish city of their origin). These vases were part of a group of nine made especially for the 1895 Colombian exposition in Chicago. Another Talaveras vase is on display in the law library. These are the only ones of their kind in the world owned privately. The remaining six vases are in museums.

The paintings on the walls of the Lounge are the work of Peruvian artist Victor Robian from the early 1900s. Much of the furniture in Mann Lounge is from the Rolyat Hotel's original collection. 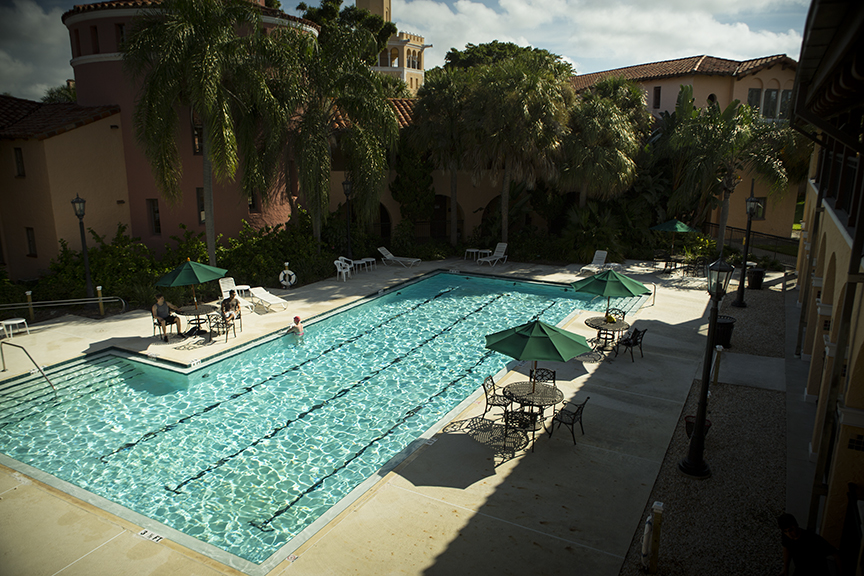 Student Center
The two-story Student Center is home to the offices of student life, student organizations and career development. The building also houses the student lounge and exercise facilities that include a lap pool, weight room and cardiovascular room.
Granary Tower
The Granary Tower is located in the Plaza Mayor and is a reproduction of the Golden Tower of Seville. It was historically designed to be used in times of peace to store grain, and in war as a point of defense. 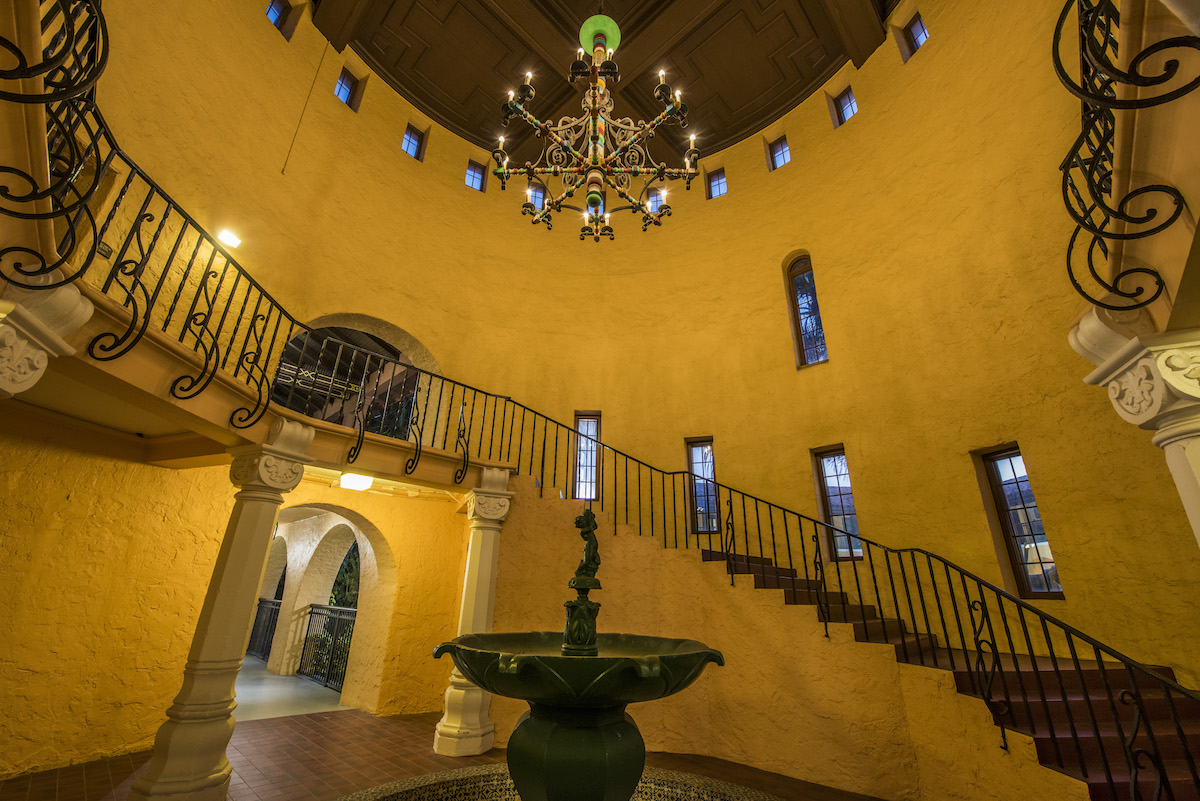 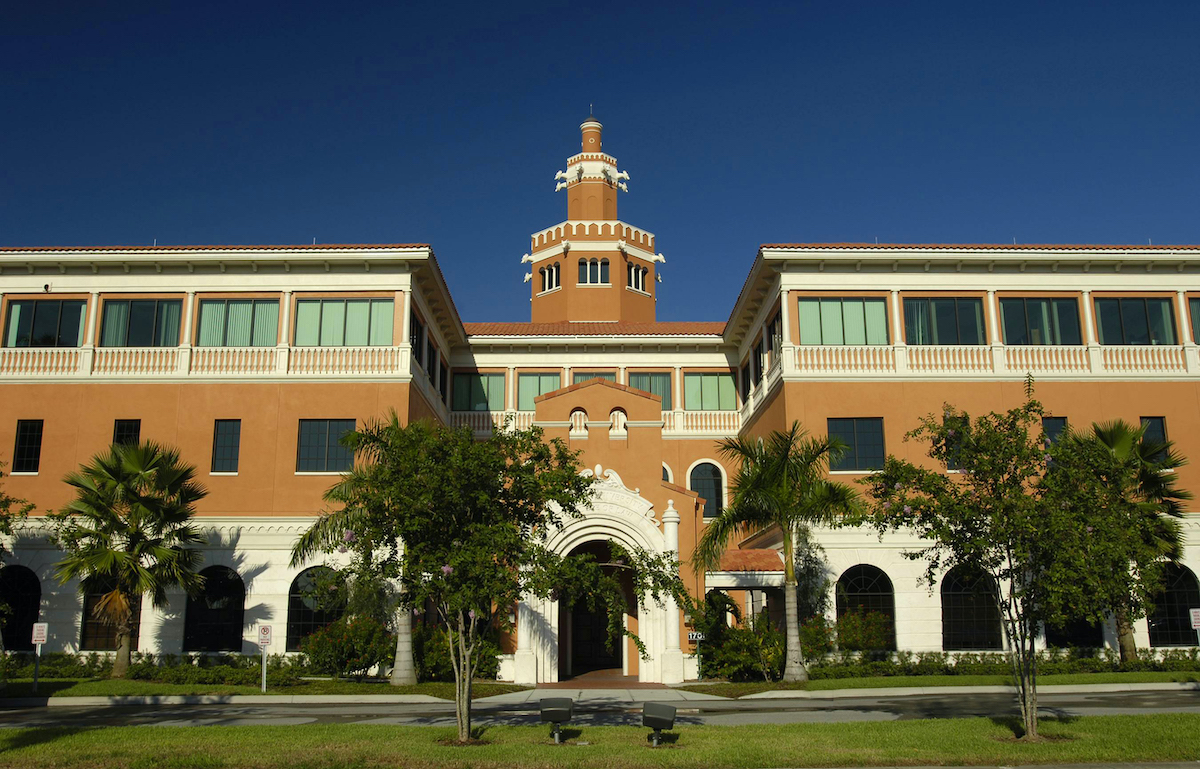 Tampa Law Center
Located at the gateway to downtown Tampa along the Hillsborough River, the Tampa Law Center opened in 2004 as a developing hub for legal activity in the Tampa Bay area. The three-story, 73,500-square-foot building reflects the same Mediterranean-Revival architecture of Stetson’s Gulfport campus.The Tampa branch of Florida’s Second District Court of Appeal resides in the Tampa Law Center. This public-private partnership between a working court and a law school is the first of its kind in Florida.
SHARE PAGE