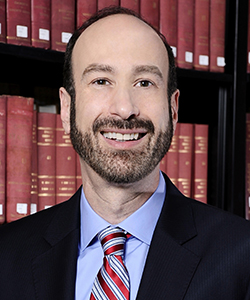 Before joining the faculty, Professor Bauer clerked for the Honorable William R. Robie, chief immigration judge of the United States. Following his clerkship, Professor Bauer joined the Federal Trade Commission's Bureau of Competition, where he worked on cases involving high-profile mergers and other anticompetitive conduct. After leaving the Federal Trade Commission, Professor Bauer moved to Chicago to practice antitrust law in the private sector with two large law firms.  He represented one of the defendants in a multi-billion dollar multi-district price-fixing case and counseled other major public corporations on antitrust and consumer protection matters.

Professor Bauer wrote and edited a new treatise on state unfair trade practice laws for CCH/Wolters Kluwer, and then joined the Chicago-Kent College of Law faculty in a fellowship position where he taught antitrust, administrative law, and legal writing.

Professor Bauer received his bachelor's degree in political science from the University of Chicago, where he received the Howell Murray award for outstanding contributions to the university. He received his law degree from Emory University, where he was a member of the Moot Court Honor Society, and taught first-year legal research and writing.

Professor Bauer's research interests are wide-ranging; he has written in the areas of antitrust, administrative law, consumer protection, property, higher education, and elder law, often drawing connections between them. In antitrust, he is particularly interested in the doctrine's impact on the non-profit sector, retail, and its interplay with consumer protection law. Professor Bauer speaks frequently on antitrust and consumer protection issues at law schools, conferences, and before advocacy groups around the world. His research has been quoted in the New York Times and in major newspaper editorials. At Stetson, Professor Bauer has promoted financial literacy and consumer education for law students by creating and teaching his for-credit weekend-long Financial Advocacy course. He has taught International and Comparative Competition Law in Stetson's summer abroad programs in China, Estonia, Spain, Argentina, and Global Aging Law in The Netherlands. Professor Bauer has also coached Stetson's Law and Economics moot court team and co-coached its Arbitration team.

Professor Bauer has supported the work of Stetson's Centers for Excellence in Elder Law and Higher Education Law through speaking engagements and research. Professor Bauer has also been active in professional associations, serving as Chair of the Education Law and Aging and the Law Sections for the Association of American Law School, and was a member of the Steering Committee for the Southeastern Association of Law Schools. Professor Bauer is currently the faculty representative to the College of Law's Board of Overseers.

In 2011 Bauer was a visiting scholar at Queen Mary, University of London, and was Academic Director of Stetson's Autumn in London Semester Study Abroad Program. Professor Bauer has been a Senior International Fellow and Visiting Scholar at the University of Melbourne in Australia and was named a Distinguished International Fellow to the Canadian Centre for Elder Law. In 2013 Professor Bauer was awarded Stetson's Branton Excellence in Teaching Award. In 2017 Professor Bauer was the winner of the Homer and Dolly Hand Award for Faculty Scholarship.