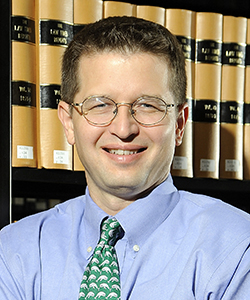 Professor Gardner is an internationally recognized expert in wetland law and policy. Recent projects include testifying before a World Bank arbitration panel, advising the Government of Oman regarding wetland policy, coauthoring amicus briefs on behalf of environmental scientists, and creating interdisciplinary courses that facilitate discourse among experienced scientists, policymakers, and students.

His research and scholarship focus on U.S. and international wetland legal and policy issues, with an emphasis on biodiversity offsets. He has lectured in Africa, Asia, Europe, and North and South America.

The Institute for Biodiversity Law and Policy received the American Bar Association's 2016 Distinguished Achievement in Environmental Law and Policy Award, and Professor Gardner is the recipient of the 2018 President's Service Award from the Society of Wetland Scientists and the 2006 National Wetlands Award for Education and Outreach.

An executive editor of the Boston College Law Review and a member of the Order of the Coif, he graduated magna cum laude from Boston College Law School. He then clerked for Chief Judge Francis J. Boyle of the United States District Court for the District of Rhode Island. From 1989 to 1993, he served in the Army General Counsel's office as the Department of the Army's principal wetland attorney, advising the assistant secretary of the Army (civil works) on legal and policy issues related to the Corps of Engineers' administration of the Clean Water Act section 404 program. From 1993 until he joined the Stetson faculty in 1994, Professor Gardner worked for the Department of Defense, where he participated in negotiating international agreements with Russia, Ukraine, Kazakhstan, and Belarus to facilitate the dismantlement of the former Soviet Union's nuclear weapons.

Global Wetland Outlook: State of the World's Wetlands and Their Ecosystem Services

The Global Wetland Outlook, the flagship publication of the Ramsar Convention on Wetlands, provides a current overview of wetlands: their extent, trends, drivers of change, and the responses needed to reverse the historical decline in wetland areas and quality.

Advocating for Science: Amici Curiae Brief of Wetland and Water Scientists in Support of the Clean Water Rule

This paper, which is adapted from our amici brief supporting the Obama administration’s Clean Water Rule (and supplemented with additional studies), elaborates on the scientific basis behind efforts to address human activities that alter the integrity of aquatic ecosystems.

Since joining the Stetson faculty, Professor Gardner has twice received Stetson University's Homer and Dolly Hand Award for Excellence in Faculty Scholarship and has been voted the Outstanding Professor by the Stetson student body. He has taught at Stetson's summer programs in Spain, Germany, Argentina, and Estonia, and has been a visiting professor at the Universidad de Málaga (Spain) and Concordia International University-Estonia, where he received the Outstanding Instructor Award. At Stetson, Professor Gardner has served as director of graduate and international programs, associate dean, vice dean, and interim dean.