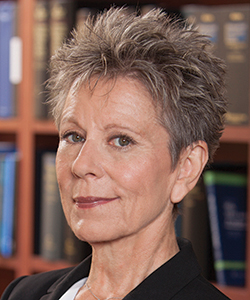 Rebecca C. Morgan is the Boston Asset Management Chair in Elder Law. Professor Morgan teaches a variety of elder law courses in the J.D.. program. She is the successor co-author of Matthew Bender's Tax, Estate and Financial Planning for the Elderly, and its companion forms book (Lexis) and a co-author of Representing the Elderly in Florida, (Lexis), The Fundamentals of Special Needs Trusts (Lexis), Ethics in an Elder Law Practice (ABA), and Planning for Disability (Bloomberg BNA Portfolio). She is co-author of Elder Law in Context (Aspen), r of Bankruptcy in Context, and Mastering Interviewing and Counseling. Professor Morgan has authored a number of articles on a variety of elder law issues and has spoken a number of times on subjects of elder law. She is the co-editor of the Elder Law Prof Blog, (with Katherine Pearson (Penn State).

Professor Morgan is a past president of the National Academy of Elder Law Attorneys, past president of the board of directors of the National Senior Citizens Law Center, past chair of the American Association of Law Schools Section on Aging and the Law and of the Florida Bar Elder Law Section, and on the faculty of the National Judicial College. She served as the reporter for the Uniform Guardianship and Protective Proceedings Act. She served on the Florida Attorney General's Task Force on Elder Abuse and the Florida Legislative Guardianship Study Commission. She is a member of the American Law Institute (ALI), academic advisory board for the Borchard Center for Law and Aging, an academic fellow of the American College of Trusts & Estates Counsel (ACTEC), a NAELA fellow, and a member of NAELA's Council of Advanced Practitioners (chair 2012-2014). After a term on the Board of the ABA Commission on Law and Aging, she is a special advisor to the ABA Commission on Law and Aging. She is a member of the board of directors for the Center for Medicare Advocacy and for the American Society on Aging.