Courses
Research and Writing I and II Interviewing and Counseling 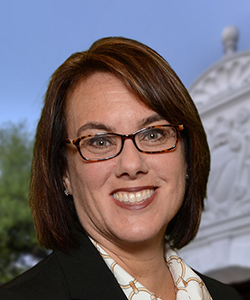 Professor Kelly M. Feeley joined the Stetson faculty in 2000 and teaches Research, Writing, Interviewing, and Counseling. Since 2001, she has been an integral part of Stetson's national award-winning advocacy program as the faculty advisor of Stetson's Alternative Dispute Resolution (ADR) Board, which consists of the arbitration, client counseling, mediation, and negotiation competition teams. As a co-coach of the arbitration teams, she has helped the teams capture a national championship, two national finalist titles, and three regional wins. At the last three regionals, her two Stetson teams met in the final round all three times, and this past year, her two Stetson teams were dual regional champions. She has coached Stetson's Environmental Negotiation Teams to two national championships, two national finals, and seven semi-finals. She has also coached or co-coached the mediation teams to the national semifinals and two regional championships.

Professor Feeley lectures on both advocacy and research and writing, speaking on Negotiating and Mediating in a Global Environment at the Global Legal Skills Conference at Georgetown in the summer of 2009 and Teaching Interviewing, Counseling, and Other Practice Skills in Particular Contexts at the UCLA School of Law and Brigham Young University J. Reuben Clark Law School's Pedagogy of Interviewing and Counseling II Conference in fall 2009. She has made short lectures available on interviewing, counseling, and negotiation through Stetson's Advocacy Center's Resource Center and has participated in several videos on elder law ethics that have been used nationwide. She has also been interviewed several times on television for her expertise in nonverbal communication and civil litigation.

A handbook designed for law students to understand the substance and nuances of interviewing and counseling potential and established clients.

A handbook designed for law students to understand the benefits, challenges, and processes of representing clients during a negotiation, mediation, or arbitration.

Professor Feeley is currently the St. Petersburg Bar Association liaison for Stetson and previously served on the St. Petersburg Bar executive committee from 2007-2009. She was a member of the Community Law Program Board from 2004-2009; served on the American Bar Association Law Student Division Competitions Subcommittee from 2003-2009; and served as co-president of the Barney Masterson Inn of Court in 2005-2006.