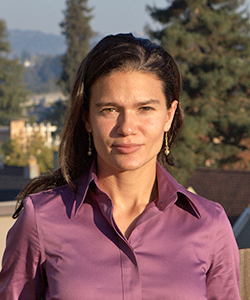 While at the Center for Biological Diversity, Professor Lopez’s work involved advocating for the protection of ecosystems in the Caribbean and the Southeast U.S. She has written, taught, and presented extensively on environmental topics, including at Stetson Law, where she taught environmental practice, interviewing and counseling, and topics in biodiversity. Professor Lopez presented on red tide in Florida waterways in August of 2021 as part of the Edward and Bonnie Foreman Biodiversity Lecture Series. In January 2017, she spoke about the hazards of Florida’s phosphate industry as part of the series, and in April 2016, she presented at the 16th International Wildlife Law Conference on “The Miraculous Life of a Sea Turtle.” She also served as a final-round judge for the 2020 International Environmental Moot Court Competition.

Can’t We Just All Get Along: Reconciling Pesticide Use and Species Protection

It is widely acknowledged that pesticides impact the environment and wildlife in deleterious ways. The Environmental Protection Agency ("EPA") registers and oversees the use of over one billion pounds of pesticides in the United States each year to control weeds, insects, and other organisms. Yet...

What We Should Learn From the BP Spill

From April 20, 2010, to August 8, 2010, when BP's Macondo well was finally cemented and the flow offi­cially stopped, approximately 205,800,000 gallons of crude oil poured into the Gulf of Mexico. Put into indus­try terms, that's about 4.9 million barrels of oil. That's enough oil to completely fill over 311 Olympic-sized swimming pools...

From Bail Out to Righting the Course: The Commonsense Action, the United States Must Take to Address Its Flood Crisis, Tulane Environmental Law Journal, Vol. 33 (Summer 2020).

Can’t We Just All Get Along: Reconciling Pesticide Use and Species Protection, Virginia Environmental Law Journal Vol. 33 (Fall 2015).

Too Much Oil for the Rubber-Stamp: The Government’s Role in the BP Oil Spill, Florida A&M University Law Review, New Directions in Environmental Law and Justice Symposium Edition, Vol. 6 (Spring 2011).

Dispersants: The Lesser of Two Evils or a Cure Worse Than the Disease?, coauthored with Catherine Kilduff, University of Maine School of Law, Ocean and Coastal Law Journal, Vol. 16 (2011).