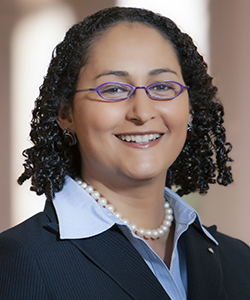 Ciara Torres-Spelliscy is a professor teaching courses in Election Law, Corporate Governance, Business Entities, and Constitutional Law. Prior to joining Stetson's faculty, Professor Torres-Spelliscy was counsel in the Democracy Program of the Brennan Center for Justice at NYU School of Law where she provided guidance on the issues of money in politics and the judiciary to state and federal lawmakers. She was an associate at Arnold & Porter LLP and a staffer for Senator Richard Durbin.

Professor Torres-Spelliscy has testified before Congress, and state and local legislative bodies as an expert on campaign finance reform. She has also helped draft legislation and Supreme Court briefs.  She is the editor of the 2010 edition of the Brennan Center's campaign finance treatise, "Writing Reform: A Guide to Drafting State and Local Campaign Finance Laws."

She researches and speaks publicly on campaign finance law as well as judicial selection. She has spoken at symposia and other events at 49 universities around the nation, including Harvard, Yale, and Stanford. She presented at the 2013, the 2015, the 2018, the 2019, and the 2020 Annual Conventions of the Association of American Law Schools (AALS) and at the 2014, 2018, and 2019 Annual Convention of the American Constitution Society (ACS), and the 2011, the 2014, and the 2016 Annual Conventions of the Council on Governmental Ethics Laws (COGEL). In 2016 she spoke at the Federal Election Commission (FEC) at a forum on dark money and foreign money in U.S. elections. In 2018, she spoke at the International Society of Public Law's ICON-S conference in Hong Kong.

She is the author of the book Corporate Citizen? An Argument for the Separation of Corporation and State (Carolina Academic Press, 2016), and the book Political Brands (Edward Elgar Publishing, 2019).

The Roberts Supreme Court has spent the last twelve years branding and rebranding the meaning of the word “corruption” both in campaign finance cases and in certain white-collar criminal cases. This Article explores what the Supreme Court has done to rebrand corruption.

From a Mint on a Hotel Pillow to an Emolument

Is President Trump illegally profiting from the Presidency? Answering this question actually requires complex constitutional interpretation that breaks new legal ground and could change e rules for all future presidents.

In 2014, Stetson University College of Law awarded Professor Torres-Spelliscy the Dickerson-Brown award for Excellence in Faculty Scholarship. In 2013, Professor Torres-Spelliscy was named as a member of the Lawyers of Color's "50 Under 50" list of minority law professors making an impact in legal education. She was awarded tenure in 2016. In 2017, she was elected to be Chair of the AALS Section on Election Law for a term that started in 2018. She was awarded the Homer & Dolly Hand Award for Excellence in Faculty Research by Stetson University in 2019. In 2020, Professor Torres-Spelliscy was elected to be a member of the AALS Section on Constitutional Law Executive Committee.