Located at the gateway to downtown Tampa along the Hillsborough River, the Tampa Law Center opened in 2004 as a developing hub for legal activity in the Tampa Bay area. Stetson has been approved to offer 50 percent of the classes for the part-time J.D. degree at the Law Center; in addition, the Tampa branch of Florida's Second District Court of Appeal resides in the building. This public-private partnership between a working court and a law school is the first of its kind in Florida. 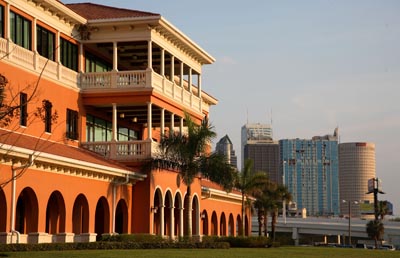 The three-story, 73,500-square-foot building reflects the same Mediterranean-Revival architecture of Stetson's Gulfport campus. Stetson's signature tower, modeled after the Torre de Oro in Seville, Spain, is replicated at the top of the Tampa Law Center. Eight friezes, which depict significant scenes from legal history, surround a custom-designed candelabra at the center of the atrium named for the late Dean W. Gary Vause, who acquired the land for the Tampa Law Center. Artwork from a number of Florida artists enhances the building's design.

The Wm. Reece Smith Jr. Courtroom, named for a former president of the American Bar Association who has served on Stetson's part-time faculty since 1954, is shared by the law school and appellate court. The two jury rooms can be used in mock trials to compare the deliberations of different panels. In 2008, Stetson opened a smaller courtroom on the second floor for advocacy classes and competition-team practices.

A wireless network connects users to the Internet from anywhere in the building. Every classroom and courtroom is equipped with a touch-screen podium that controls access to extensive audio-visual resources.