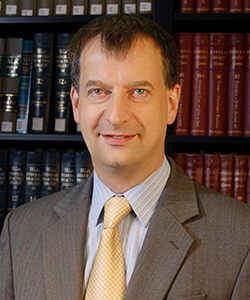 He is the author of several books, including Products Liability Law (American Bar Association, 2015) and Product Liability: Cases, Commentary, and Conundra (Carolina Academic Press, 2012), and has edited several more, including Law, Justice, and Miscommunications: Essays in Applied Legal Philosophy (Vandeplas, 2011).

Dr. Kaye created and edited the very firstWebfestschrift to be dedicated to an American law professor, Shaking the World Gently: A Webfestschrift in Honor of Professor Robert Dale Bickel (2013). He also designed and co-founded the Stetson Journal of Advocacy and the Law, the first online law review designed to be read online.

In 2016, Dr. Kaye launched webby-books.com, which publishes law books as websites. He created the first Webby Book, Law of Torts, and is currently writing another on Remedies, which he expects to publish in late 2018 or early 2019.

Products Liability Law lays out from the beginning the five elements common to all products liability claims. It then builds on this foundation by tackling each new area of the law, while explaining how each doctrine relates to the politico-economic and historical context in which the law operates.

Unlike so many other casebooks, this is not just a series of case extracts cut and pasted together with minimal editorial input. On the contrary, Kaye provides both a helpful introduction to and commentary on, each topic addressed.

Dr. Kaye recently joined the team at ClassicPress, which plans to fork WordPress and enhance the open web by creating a leaner, more secure, platform that is more responsive to the needs of its users.

While in the UK, and following the Herald of Free Enterprise disaster in 1987, he initiated a campaign for a change in the law on corporate manslaughter that led eventually to the passage of the Corporate Manslaughter and Corporate Homicide Act 2007.

Between 1989 and 1991, he led an investigation into the practices of the West Midlands Police Serious Crime Squad, the final report of which was published in 1991 by the Civil Liberties Trust as “Unsafe and Unsatisfactory?”. The inquiry led to the disbandment of the Squad, while the report led to the exoneration of over 150 convicted persons. It also fed into a more general inquiry into wrongful convictions, the Runciman Commission, which led to the establishment of the UK's Criminal Cases Review Commission.

Formerly a consultant with one of the largest education law practices in the United Kingdom, Dr. Kaye has advised numerous schools, colleges, and universities. He was commissioned on three occasions by the Estonian government to carry out evaluations of law teaching at higher education institutions in Estonia. He also co-wrote the United Kingdom's general guidance for schools on the Human Rights Act.