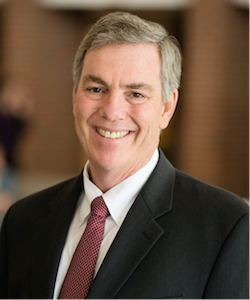 Charles J. Tabb is a Distinguished Visiting Lecturer at Stetson University College of Law for 2021-22, and served in the same capacity in 2020-21.

Before coming to Stetson, he was the Mildred Van Voorhis Jones Chair in Law at the University of Illinois College of Law. He taught at Illinois from 1984 through 2019, and is considered one of the nation’s leading bankruptcy scholars, specializing in bankruptcy, contracts, and commercial law. Professor Tabb served as interim dean at Illinois during the 2007-08 academic year and was the associate dean for academic affairs at Illinois from 2003-05.

Professor Tabb earned his bachelor’s degree and graduated summa cum laude from Vanderbilt University, where he was elected to Phi Beta Kappa. He earned his JD from the University of Virginia, serving as a member of the Virginia Law Review, and he was elected to Order of the Coif. After graduation, Tabb recorded the highest score of over 1,400 successful candidates on the Texas state bar examination. Before joining the Illinois faculty, he practiced bankruptcy and commercial law in Dallas, where his cases included the Braniff Airways and Continental Airlines Chapter 11 reorganizations. He currently is of counsel with the law firm of Foley & Lardner LLP in Chicago.

In his years on the Illinois faculty, Professor Tabb received the John E. Cribbet Excellence in Teaching Award, a Best Professor award, was selected as the 2L Professor of the Year, and received a campus-wide Outstanding University Professor award. He has also served as a visiting professor at the universities of Northwestern, Texas, Colorado, Georgia State, FGV in São Paulo, Brazil, Shanghai Jiao Tong University in Shanghai, China, Tilburg University in the Netherlands, and Católica Global School of Law, Universidade Católica Portuguesa, in Lisbon, Portugal; and as a visiting scholar at Cambridge University, Nottingham, and Shanghai. In 2014, he served as the Resident Scholar for the American Bankruptcy Institute in Alexandria, Virginia. Professor Tabb has published fourteen books and scores of articles and book chapters on bankruptcy law. His books include a 1,400-page treatise, The Law of Bankruptcy (West Publishing, 5th ed. 2020); a casebook on bankruptcy, Bankruptcy Law: Principles, Policies & Practice (with Brubaker) (Carolina Academic Press, 5th ed. 2021); A Debtor World: Interdisciplinary Perspectives on Debt (ed. with Professors Brubaker and Lawless) (Oxford University Press 2012); and Bankruptcy Anthology, an edited collection of scholarly works on bankruptcy law (Anderson Publishing Co., 2002). Tabb also was one of the lead editors for the multi-volume treatise, Bloomberg on Bankruptcy (2014), and was the editor for Best of the ABI: The Year in Business Bankruptcy (2014).

In 2014, he received the Wayne R. LaFave Award for Excellence in Faculty Scholarship, signifying the outstanding book published by a member of the Illinois law faculty, for the Third Edition of The Law of Bankruptcy. That Third Edition has been translated into Chinese and is widely used by courts and lawyers in China. The Fourth Edition was quoted at length by the United States Supreme Court in a case in 2018 (138 S.Ct. 883). The Fifth Edition currently is being translated into Georgian. Tabb won the Editor’s Prize from the National Conference of Bankruptcy Judges for an article in the American Bankruptcy Law Journal (at 65 Am. Bankr. LJ 75).

In 1993, he was appointed by Chief Justice William Rehnquist to the Advisory Committee on the Federal Rules of Bankruptcy Procedure of the Judicial Conference of the United States. He was later appointed by Illinois Governor Jim Edgar as a commissioner for the National Conference of Commissioners on Uniform State Laws, and served from 1997 to 2001. In 2002, Professor Tabb traveled to Beijing, where he advised the National People’s Congress of the People’s Republic of China on the reform of the Chinese bankruptcy law, which went into effect in June 2007.