Stetson University College of Law has a reputation for its excellence in advocacy and the Moot Court Board is no exception. Students return each semester with numerous awards and achievements, illustrating the college's commitment to exceptional legal writing and oral advocacy. Throughout the past 10 years, Stetson's Moot Court Board has placed in the semifinals or higher on 88 occasions, including 32 victories and 56 best brief and best oralist awards. 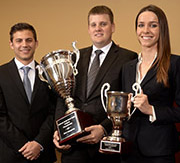