No, the senior art major from Key Largo isn’t some sort of giddy narcissist.

“When they first announced my name, I didn’t think it was me,” Lozano said during an interview at the Hand Art Center, where the exhibition runs through Dec. 9. “I was clapping. It took my boyfriend going ‘That’s you!’ I was like ‘What?’ ”

Lozano entered the show in previous years, but her work wasn’t selected to be part of the exhibition, which also is open to non-art majors. From the 100 artworks submitted for the show this year, Stetson art faculty chose 58 pieces to be exhibited. Holly Keris, acting director of the Cummer Museum of Art and Gardens in Jacksonville and a Stetson alumna, chose the winners of six awards. Students also voted on the DOBROS Student Choice Award.

Winning Best of Show “is a huge deal because it happened at a good time for me,” she said. “I’ve been struggling balancing my time with lacrosse while still working on pieces for my class. A lot of people were like ‘Oh, you’re an art major. That must be so easy, lucky you.’ It’s encouraging me to get back in the studio and keep working hard.”

Natasha Radovicz Schaidt, a senior studio art major from Van Nuys, Calif., who was raised in Florida, won the Charlene Thomas Award of Excellence for “Beatriz,” a heart-shaped ceramic work.

“Beatriz was my grandmother from Brazil who passed away,” Schaidt said. “She collected a lot of Oriental art. So I just did the heart in honor of her, as representative of how important she was to me and my soul.”

Ariana Santana, a junior from the DeLand area who’s pursuing a double major in studio art and economics, won the Blake Elliot Salon & Gallery Award of Distinction for her mixed-media sculpture “Bad Hombre.”

“Last year I said to myself, ‘I don’t think anything I have is worthy of being in the show and going through being rejected,’ ” Santana said. “It was work to make myself turn in stuff, but I went through it and I’m happy I did.”

“It’s scary to fail, but I think failure is part of being an artist and it makes your skin a lot tougher,” Schaidt said, addressing the pressure of entering a juried exhibition. “I try selling my artwork on the side as well. You deal with a lot of different personalities and you’re literally putting yourself out there. Failure is part of the journey, but I have to continue on with my art because that’s my passion.”

Tonya Curran, director of the Hand Art Center, is not involved in judging, but she noted she tells students the process “is subjective. People are making the selections and they have different tastes. In a sense it is failing, but it isn’t.”

Lozano and Santana are undecided about their future. Schaidt is pondering a move to New York City.

“I’m a marketing minor and I really enjoy marketing,” Lozano said. “I want to somehow find a way to combine both art and marketing – maybe advertising. It’s a big question mark.”

“My plans are really up in the air just because of the very distinct majors I have,” Santana said. “I’m not sure if I want to go forward in economics and have art as this kind of hobby I keep growing, and maybe eventually leave economics and turn to art, or just go to grad school with art. It’s so very up in the air for me.”

“I’m done this semester,” Schaidt said. “I want to go move to New York in July and try out the art scene there and see what happens. Maybe go to grad school there.”

Curran gave praise to Stetson faculty and the exhibition’s sponsors.

“I have to give our faculty kudos,” she said. “They have a lot of skills that they are able to teach the students. You can be a brilliant artist and not know how to teach. We have a faculty who do a pretty good job of getting students to go outside their comfort zone.”

Other exhibition awards include: 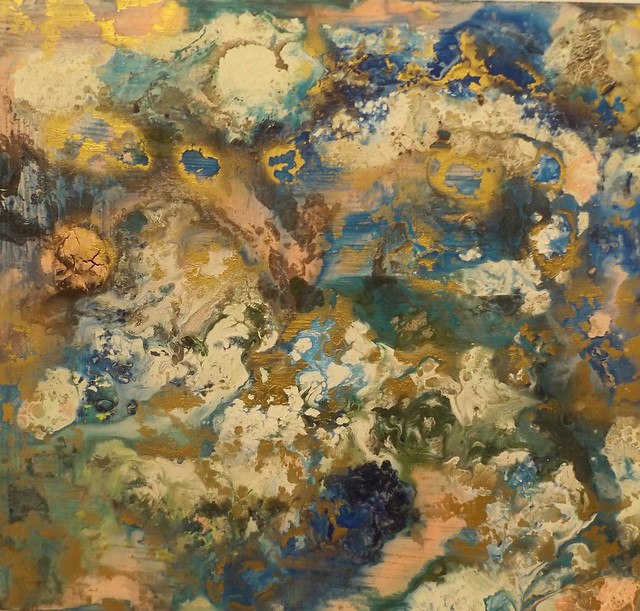