First-year student Katerina Rancano was looking forward to Move-in Day at Stetson University for months, but her mother was worried.

That changed when they arrived outside Chaudoin Hall on Saturday morning and found a dozen members of the Hatter football team – including offensive linemen Jimmy McCammon (6-4, 309 pounds) and Jeff Lu (6-2, 318 pounds) — waiting to help carry everyone’s belongings inside.

“For a mother, that’s the biggest, wonderful-ist thing on this Earth,” gushed mother Sandra Rancano, standing in her daughter’s third-floor room with all her belongings stacked around them. “I was really worried about climbing three sets of stairs with all of this stuff.”

Move-in Day started early on Saturday, with the first family lining up outside the Hollis Center at 6:15 a.m. By 7:40 a.m., when the doors opened 20 minutes early, the line snaked around the building.

New students and their families poured inside the Rinker Field House as music played and student volunteers clapped and cheered. Inside the one-stop check-in, incoming students received their residence hall room keys, student IDs, parking decals, a Stetson t-shirt and other Hatter swag. 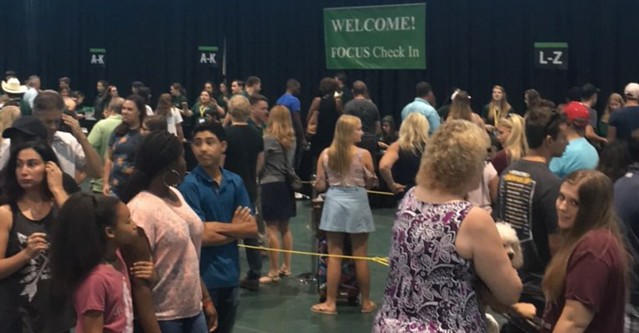 Afterward, they headed to their Residence Halls, where Hatter athletes and other student volunteers waited to help them move in. Volunteers also waited under canopies with free snacks and ice-cold bottled water for the crowd.

“We try to make it as quick and painless and efficient as possible,” said Stetson President Wendy B. Libby, Ph.D., as she mingled with students and their families in the Rinker Field House.

“After registration, I start getting notes back from families, saying we thought it would take forever and it was a breeze and everybody knew what they were doing and they got us where we needed to be. I really think it’s one of the most efficient ones you’re going to find anywhere in the country,” Libby said.

The Hatter football players skipped Saturday morning practice to help out, the linemen McCammon and Lu said. Then, the players were off to play a free scrimmage Saturday night at 7 p.m. in Spec Martin Memorial Stadium.

Incoming students said the warm welcome and pretty surroundings were what initially attracted them to Stetson.

“I just really like the campus, I like everyone’s energy here,” said Brianna Morris, a first-year student from Coconut Creek who will major in Communications and Media Studies. “I think it’s a really nice place to be.”

Added incoming student Kristina Parras of St. Cloud, a psychology major, “I’ve been looking forward to this for a while, like, before I was even accepted. This is the only school I toured and as soon as I was here, I was like, this is it. I was dead-set on coming.”

About 700 new students were expected to move in on Saturday and then begin a five-day FOCUS orientation for first-year students and transfer students with less than 24 credit hours.

Residence Halls will open to other returning students beginning on Sunday, Aug. 20. University officials expect about 2,000 students to move onto campus – filling Residence Halls and Apartments to capacity — before classes begin on Thursday, Aug. 24.

In Gulfport, the College of Law has welcomed 232 new full-time students and 37 part-time students during law school orientation, bringing total enrollment there to 867 students.

Undergraduate enrollment on the DeLand campus is expected to hold steady at about 3,100 students for the fall semester.

First-year student Christian Martinez, of Tampa, plans to major in music technology and chose Stetson for its School of Music.

“I came on school trips twice in high school and I was just fascinated by it,” he said. “It was a little surreal driving over. I didn’t get to sleep until 3 a.m. and I woke up at 4:30.”

-Cory Lancaster with Brandi Palmer at the Stetson College of Law in Gulfport.