Stetson University has signed an agreement to automatically admit students from the Daytona State College honors program, saying it will help reduce obstacles faced by students with associate degrees who want to earn a bachelor’s degree.

Nationally, fewer than one in seven students with an associate degree transfer to a four-year college and earn a baccalaureate degree, said Michael Denner, Ph.D., Director of Stetson’s Honors Program and a professor of Russian Studies.

Experts in higher education call this the “leaky pipeline,” said Denner. He approached DSC’s Quanta-Honors College about forming the partnership and spent about six months with his co-Director Melinda Hall working on the agreement.

The agreement allows DSC students to be admitted to Stetson if they are in good standing in the DSC Quanta Honors program, pass certain classes and complete the application process. Sixteen students who pursue pre-law and pre-health degrees can receive a financial aid package that could cover all tuition and fees at Stetson, valued at $43,240 this year, if they are accepted into Stetson’s Honors Program, Denner said. Other students can receive partial scholarships.

Under the program, Stetson faculty members will advise students from the time they first enroll at DSC, said Stetson President Wendy B. Libby, Ph.D.

“I don’t think there is another program like this in the country,” Libby said.

The DSC Honors students make ideal candidates for admission to Stetson because they are “academically motivated and gifted,” Denner said.

“They come to Stetson with a really rigorous preparation,” he said, adding they also come from diverse backgrounds, including in race and ethnicity, from economically disadvantaged backgrounds and from foreign countries.

Denner said the program’s emphasis will be on helping individual students, and not on an agreement between two institutions.

“It’s personal, it’s not institutional,” he wrote in an email. “For me, the essence of a Stetson education is its intentional focus on the individual student.”

News of the agreement attracted 60 DSC Honors students to a recent open house on Stetson’s DeLand campus. During the event Sept. 23, the DSC students toured Stetson, met with faculty and ate lunch with Stetson honor students. 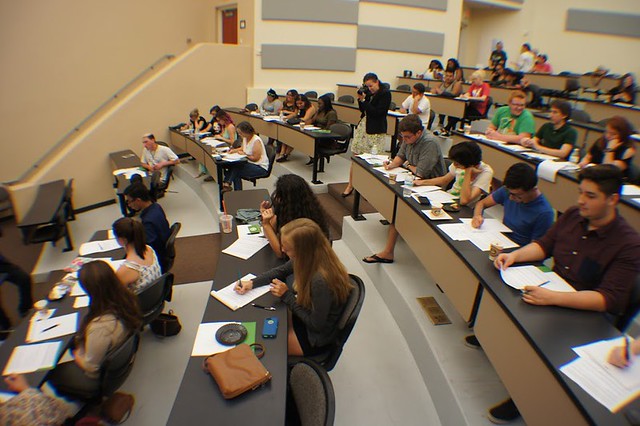 “The interest at DSC is really huge,” Denner said during a recent presentation to Stetson development officers, who will look for grants, corporate gifts and donations from individual philanthropists to expand the program.

“We’re leading the country in how to change and fix the leaky pipeline,” said Rina Tovar Arroyo, assistant vice president for Development for Parent and Alumni Engagement at Stetson.

Historically, students who enroll in community colleges to get an associate of arts degree face more challenges in earning a bachelor’s degree than other students – mainly socio-economic factors, said Maggie Karda, chair of the DSC Quanta-Honors College.

“The main problem we deal with in community college is we have such a high percentage of first-time-in-college students who come from impoverished backgrounds,” she said, adding that students can face financial, social and academic challenges if no one in their family has ever attended college.

Denner said the students can face other obstacles, too, in transferring to a four-year college. Most find it virtually impossible to earn the required 128 credit hours needed to graduate in four years and need more time. They also may need more prerequisites to pursue their major, which further can slow their progress.

The new agreement lists which classes students must take at DSC in order to graduate from Stetson in four years. And it guarantees the students will graduate after four semesters at Stetson if they maintain adequate academic progress.

Students from the DSC Honors program already are enrolled at Stetson, but the first group to enroll under the new agreement will arrive in two years.

Nathaniel Falk, 19, is a sophomore in the DSC honors program and hopes to be admitted automatically to Stetson next fall – possibly into its Honors Program – to study pre-med or physics. The Palm Coast resident said he would receive generous scholarships to attend Stetson, but he also was attracted to its reputation and rigor.

“I’m very interested in attending Stetson, due to the scholarship opportunity and how good it is academically compared to other colleges,” he said.