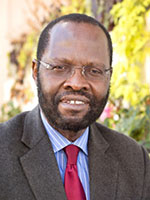 Having been involved in the struggle against authoritarian rule in Kenya throughout his academic career, he was among the leaders who made a break through into multiple party politics in 1992. He was then elected to Parliament in that year and has served in various capacities since then. He was Minister for Planning and National Development (2003-05) and Minister for Medical Services (2008-2013). He is currently the Senator for Kisumu County in the Senate, a member of the Senate Committee of Finance, Budget and Commerce and Chairman of Senate Committee on Public Accounts and Investments.

He has published several books and articles on democracy, democratization, the state and the political economy of development in Africa. Among the publications are "Estado y Sociedad en Africa Actuel" (El Colegio de Mexico, 1983), "Popular Struggles for Democracy in Africa", (London: Zed Books, 1987); "The Context of Privatization in Kenya" (Academy Science Publishers, Nairobi, 1996); "The Study of African Politics: A Critical Appreciation of A Heritage" (Nairobi: Ball Foundation, 2002); "A Leap Into the Future" (Nairobi: Word Alive Publishers, 2006). In 1995 he was awarded the German-African Award for his contribution to democracy and democratization in Africa. He was Gro Harlem Brundland Senior Leadership Fellow in the Division of Policy Translation and Leadership Development, the Harvard School of Public Health, October to December 2013.