In fall 2013, Stetson University launched a new lecture series focused on social justice to explore issues central to our mission and values -- those that speak to human freedom, personal and social responsibility, the connections we have with each other, and the obligations that flow from our shared humanity.

From the Sit-Ins to the Freedom Rides to the Selma Movement
A Talk by Dr. Bernard Lafayette Jr.
Main Lecture at 7 p.m. in the Stetson Room, Carlton Union Building (CUB) 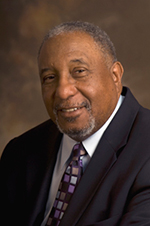 He was a college student during the Civil Rights Movement in the 1960s, when many parents of young African-Americans urged their children to keep their heads down, go to college and get a job. While many African-Americans first resisted participating in the movement, Dr. LaFayette, instead, found the courage to stand up to an entrenched system. He became a leader in the Nashville student lunch counter sit-ins, on Freedom Rides and in the march from Selma to Montgomery in 1965. An authority on nonviolent social change, having learned firsthand from Dr. Martin Luther King Jr., Dr. LaFayette traces our tumultuous history as the country grappled with putting an end to the practice of racial segregation in the wake of U.S. Supreme Court decisions.

Dr. LaFayette co-founded the Student Nonviolent Coordinating Committee (SNCC) in 1960 and directed the Alabama Voter Registration Project in 1962. In 1968, Dr. Martin Luther King Jr. appointed him national program administrator for the Southern Christian Leadership Conference (SCLC) and national coordinator of the Poor People’s Campaign, which marched on Washington, D.C., uniting individuals of all races in pushing for economic justice.

A Civil Rights icon, educator, lecturer and ordained minister, Dr. LaFayette has spent the past 50 years teaching Kingian Nonviolence Conflict Reconciliation to thousands of individuals. Currently, he is a Breeden Eminent Visiting Scholar in the College of Liberal Arts at Auburn University in Alabama.

Peter Edelman -- lawyer, policymaker and law professor at Georgetown University Law Center, where he is faculty director of the Center on Poverty, Inequality and Public Policy

Kevin Quashie, PhD -- Afro-American Studies professor at Smith College and author of The Sovereignty of Quiet: Beyond Resistance in Black Culture