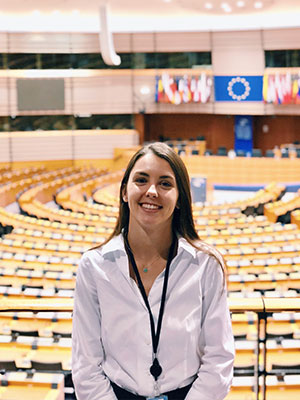 Sally Ancheva is a double-major in political science and economics. As an Edmunds Scholar, Sally came to Stetson with an exemplary record of achievement and lived up to that great potential.

Sally is a member of Phi Beta Kappa, Pi Sigma Alpha, Omicron Delta Epsilon and Phi Eta Sigma — all honor societies. While a student, she interned at the United Nations and at the European Parliament in Brussels. In May 2019, she worked on a campaign for the European Parliament elections in Bulgaria. In fall 2019, Sally was selected as a finalist for the Rhodes Global Scholarship.

Sally's senior research project, "Economic Insecurity or Cultural Backlash? A Multilevel Analysis of the Reasons People Hold Populist Attitudes in Europe," examines the factors that have led to an increase in populism in Europe. After graduation, she plans to work as an accredited parliamentary assistant in the European Parliament for a year or two before pursuing graduate studies.