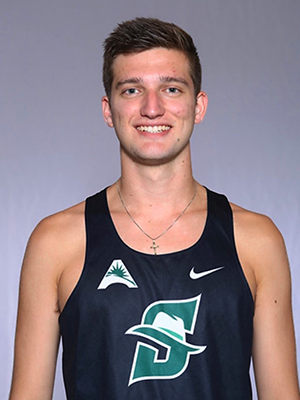 At the same time that Reece Duff was making the ASUN All-Academic Team as a student-athlete in cross country, he also began his senior research project early as a junior. Before starting the project, Reece trained in the lab for an entire semester, working with seniors — and he had no problem keeping up with them. In fact, Reece was an integral part of the lab, even helping other students when they needed technical assistance.

Reece was a dedicated research student and had a striking work ethic, as he worked toward his BS in molecular biology — typically working at night, on weekends and on holidays to complete his research project. Reece quickly became a trusted independent research student, using lab equipment unassisted. After optimizing new assays for the lab, he wrote his own protocol, which now is used as a standard lab protocol. Reece, for certain, left his mark.