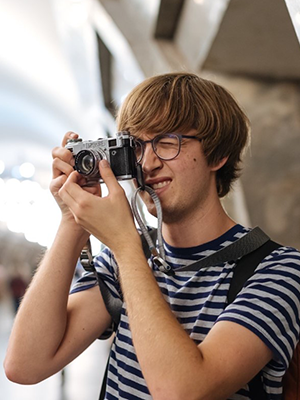 Aside from his English major, Jacob Mauser minored in philosophy and Russian language and culture. He is a member of Sigma Tau Delta, English honorary society. In his sophomore year, Jacob began working as a staff member at Touchstone, Stetson's literary and arts journal. He eventually became executive editor and has greatly helped to grow Stetson’s artistic community. In addition, he has served as MC and photographer for Uncouth Hour, Stetson’s weekly open mic night, and worked as a photographer for the Hatter Network on campus.

Jacob's senior research was on John Donne's Holy Sonnets. Also, his interest in Stetson's Program in Russian, East European and Eurasian Studies (SPREES) led to study in Ukraine during summer 2019.