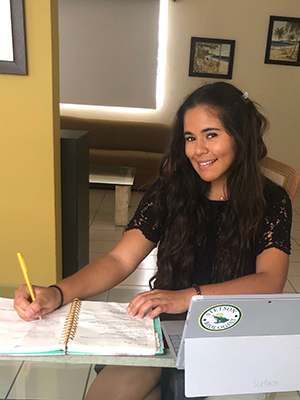 Disla arrived at Stetson as the beneficiary of the university's Presidential Scholarship, a merit award based on outstanding high school records, standardized testing and community service. Also, she received an Impact Fund Award, enabling her to experience a summer 2019 internship that earned her two awards in the 2019 Stetson Internship Showcase.

As a result, she has left Stetson with a variety of career-related experiences in Florida, Puerto Rico and Costa Rica. They included shadowing veterinarians during consults with patients and surgeries; working on animal habitat maintenance, water quality testing and food preparations; and being a member of a rescue team for marine animals.

And, while she began at Stetson being a bit unsure of herself, according to professors, Disla put those academic and work opportunities to good use, making the Stetson Honor Roll and earning Phi Eta Sigma distinction for classroom achievement. In addition, she helped the university by serving as a student ambassador, scheduling on-campus visits and guiding tours for prospective incoming students, among other duties.

"It was just the most amazing journey of watching her get more and more confident and assured as she went along through her career," commented Melissa Gibbs, PhD, professor of Biology and director of the Aquatic and Marine Biology. "She's just been one of the most interesting transitions. It's certainly one of those things that really gladdens the heart of a professor, to see how they change over time."

Receiving a Bachelor of Science in aquatic and marine biology, Disla hopes to eventually become a veterinarian