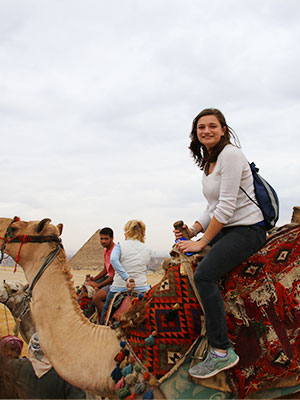 Abigail (Abbey) Crater will graduate with a bachelor's degrees in aquatic and marine biology, and in religious studies. She completed a senior research project in marine biology ("Synchronous Air Breathing as a Response to Hypoxia Exposure in Two Size Classes of Juvenile Armored Catfish, Pterygoplichthys disjunctivus"), as well as a senior research project in religious studies that combined her interests in marine conservation and religious studies ("Creatures of the Deep: Aquatic Myths and How They Can Contribute to Marine Conservation").

Abbey was named an Outstanding Junior in Religious Studies in 2019 and was inducted into Theta Alpha Kappa, the religious studies honorary society. She has been a member of Circle K International, Hatters Down Under: Scuba and Snorkel Club and Women's Chorale. She has volunteered at St. John's River cleanup, oyster bagging at the Marine Discovery Center and Samaritan Ministries Homeless Shelter Café.