Sandra Peter is a choral conductor, clinician, composer and consultant throughout the United States and abroad. 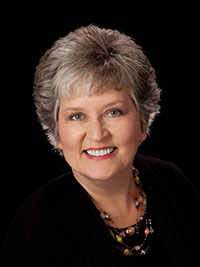 Sandra Peter is the Acting Director of Choral Activities at Stetson University (DeLand, FL) and conducts Choral Union and the Stetson Men. She recently served as a Guest Conductor for Magnum Chorum (Minneapolis, MN), Interim Director of Choirs at Florida Gulf Coast University, and Visiting Professor of Music at Macalester College. From 1991-2013, Peter taught in the music department and conducted choirs at Luther College, Decorah, Iowa. She was a part of a team of colleagues that saw extraordinary growth to Luther's music program. During this time period choral participation increased from 350 singers in five choirs to 550 students in six choirs, and the program remains strong today. Her ensembles at Luther, Aurora (select first-year women, 100 voices) and Cathedral Choir (select second-year students, 100 mixed voices) toured annually, released recordings, commissioned pieces, and performed at conferences. For over twenty years Peter served on the artistic committee and conducted Christmas at Luther, an Emmy Award-winning event that is televised annually nationwide. She has conducted All-State and honor choirs in twenty U. S. states, as well as in Singapore and Oman. Recent teaching residencies include engagements at Syracuse University and Augustana University (Sioux Falls, SD).

Peter is an active member of American Choral Directors Association, the College Music Society, Chorus America, and a charter member of The National Collegiate Choral Organization. She has been invited to speak at national meetings of both NCCO and ACDA and has performed in and conducted ensembles at several regional and national ACDA conferences.Â Her experience includes many years conducting choirs of all ages at First Lutheran Church in Decorah, Iowa, and most recently serving as Director of Music at First Presbyterian Church in DeLand, FL. She was a founding member of the National Lutheran Choir. A native of Saint Paul, Minnesota, Peter holds degrees from Concordia College (Moorhead, MN), University of Arizona and the University of Iowa.