Assistant Professor of Cello and Coordinator of Chamber Music

Dr. Jamie Clark currently serves as Assistant Professor of Cello and Coordinator of Chamber Music at Stetson University. She received her Doctor of Musical Arts Degree from the New England Conservatory in 2018 upon the completion of her dissertation "The Art of Rehearsing: A Multidimensional Study in Rehearsing String Quartets.". 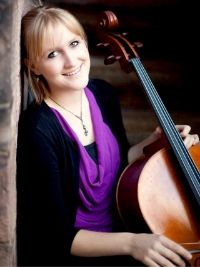 Cellist Jamie Clark of Boulder, Colorado has been praised for her sensitive, imaginative, and colorful sense of artistry. She has concertized throughout North America, South America, Europe, and Asia as a recitalist and a chamber musician. She has performed solo and chamber music recitals in venues such as Carnegie Hall's Weill Recital Hall, Boston's Jordan Hall, Eastman's Kodak Hall, New York City's American Academy of Arts and Letters, and the Isabella Stewart Gardner Museum. Recently, Jamie received the Presser Foundation's Graduate Music Award at the New England Conservatory, was a candidate in the 2015 Naumburg International Cello Competition, and was the Recipient of the George and Elsie Hodder String Scholarship for Doctor of Musical Arts Studies at the New England Conservatory.

As a chamber musician, Jamie has had the opportunity to collaborate with members of the Takács, Cleveland, Juilliard, Ying, Borromeo, Cavani, and Malibran Quartets, and individuals including Máte' Szücs of the Berlin Philharmonic, Kim Kashkashian, Carol Rodland, and Oleh Krysa. She has also had the opportunity to study with such distinguished musicians as Ralph Kirshbaum, Pieter Wispelwey, Gary Hoffman, Lluis Claret, and Steven Isserlis.

Both an enthusiastic chamber musician and entrepreneur of collaborative outreach programs, Jamie is a Co-Founder and Artistic Director of the Flatirons Chamber Music Festival, a non- profit organization based in Colorado. The festival strives to cross cultural, geographic, and temporal divides between performers, composers, and audience members, inspiring dynamic interaction within the entire Festival community. Jamie has also participated in a variety of international music festivals including Thy Chamber Music Festival in Denmark, The Holland Music Sessions, the London Masterclasses, and Violoncelles á Fontfroide in France. She will return to Denmark and Sweden in the Fall of 2019 as a Thy Chamber Music Festival Artist on Tour.

Her commitment to community engagement has lead to collaborations with the Music For Food initiative in Boston, the New England Conservatory Community Partnerships Program, the Second Chance Center in Denver, and Attention Homes in Boulder. A passionate advocate for interdisciplinary collaboration between performer and scholar worlds, Jamie has written a series of scholarly papers including The Art of Rehearsing: A Multidimensional Study in Rehearsing String Quartets, Schoenberg Quartet No. 2: Between the Twilight of Tonality and the Dawn of Early Expressionism, Schumann's Fünf Stücke im Volkston: An Intricate Network of Implications and the Consistency of Meaning, and Finding Schubert Among the Haystacks.

Jamie is thrilled to be joining the faculty of Stetson University in the Fall of 2019. She has also served as cello teacher and chamber music coach at the Phillips Exeter Academy, as well as teaching assistant to Laurence Lesser, Dr. Sean Gallagher, and Dr. Katarina Markovic at the New England Conservatory. She has also held recent teaching positions the Boston String Academy and the Newton Music School in MA. An advocate for cellistic education and a global cello community, Jamie serves as the Blog Master and Cello Chat Coordinator for the educational website CelloBello. Jamie received her Doctor of Musical Arts Degree from the New England Conservatory with Laurence Lesser. She also graduated with honors from both the Eastman School of Music (BM) where she was a student of David Ying, and the New England Conservatory (MM) where she was a student of Paul Katz.