As a writer and critic, I'm fascinated with learning about what happens where entertainment and real life intersect, and then exploring that in my writing. In my classes, I love the insight that emerges when we all read the same book or watch the same film, analyze it together, share our perspectives and examine our reactions together in conversation. 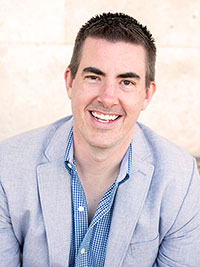 Andy Dehnart's writing and criticism about television, culture, and media has appeared on NPR and in The Washington Post, Vulture, Pacific Standard, The Los Angeles Times, GrubStreet, Playboy, The Daily Beast and other publications.

Andy publishes and writes reality blurred, which has, since 2000, offered his analysis and reporting on reality television. He's a member of the Television Critics Association, which represents about 250 U.S. and Canadian journalists and critics who write about television, and was elected to its board of directors in 2018.

Andy, 41, is the coordinator of the journalism program at Stetson University in Florida, where he teaches creative nonfiction and journalism. He has an MFA in nonfiction writing and literature from Bennington College.

Andy regularly speaks at conferences and to the media, and works with groups to help them strengthen their teams, improve communication, and use social media effectively. he's a trained improviser who hosts shows and performs as a member of two ensembles at SAK Comedy Lab in Orlando, Fla.