Convocation signifies the formal opening of the 2015-2016 academic year. All students, faculty and staff are asked to participate. 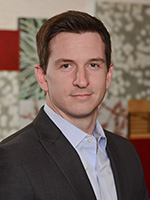 Tyler Herbert currently lives in New York City where he works in the acquisition group at Invesco Global Real Estate. In his current role, he is part of a team that seeks to identify and purchase commercial real estate investments in the Washington, D.C., New York City, and Boston markets.

Herbert recently joined Invesco from Deloitte, where he was a manager in the real estate consulting group. Prior to joining Deloitte, he worked at Fortress Investment Group and Cassidy Turley in Washington, D.C.

Herbert graduated from Stetson in 2006 with a B.BA in Finance, and subsequently served on the School of Business Administration Board of Advisors for four years. At Stetson, he was a member of the Roland George Investments Program and played on the men's soccer team. In 2012, Tyler graduated with his Master of Business Administration from the University of Oxford. While studying at Oxford, he played on the business school's soccer team and rowed for his college, Green Templeton. Recently, he has also become very active in the sport of triathlon and is currently training to compete in an Ironman in November.

In his spare time, Herbert partners with Stetson alumnus Nick Frost in a real estate investment company called Entity Capital, which focuses on purchasing investment real estate in the greater Central Florida area. He also serves on the board of Youth Factor - a non-profit focused on empowering youth to affect change in communities, programs and policy. Herbert co-founded Youth Factor with fellow Stetson alumnus Matthew Morton - working alongside one another yet again while both studying at Oxford.

Herbert was recently married to Lauren Prince after nearly a decade-long courtship that began during his senior year at Stetson. Lauren works at NBC News headquarters at 30 Rockefeller Center as a desk reporter in the International Breaking News division, and has started studying for her Masters in Journalism at Columbia University.