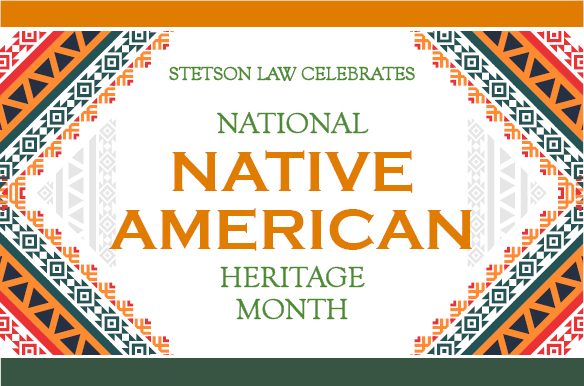 November is recognized as National Native American Heritage Month in both the United States and Canada. It is a time to celebrate the traditions, cultures, and experiences of Native Americans and other indigenous communities.

As a community of learners and advocates for justice and equality, Stetson University College of Law is honored to provide students, faculty, and staff with a resource to learn from and celebrate indigenous and Native American contributions on our campus, throughout the legal profession, and beyond. By joining this national celebration, Stetson Law invites you to explore this community resource page, including local museums and nature parks.

While this page is the result of a collaborative effort, it is not a comprehensive resource. We encourage students, faculty, and staff to explore other online and local resources and to feel free to share those that may add to the richness of this page by emailing [email protected].

Alaska Native: This term refers to the indigenous people of Alaska; the term utilized for those who are non-indigenous and born in Alaska is Native Alaskans.

First Nation, First Nations: Refers to individuals who are native to Canada and are neither Inuit (people of the Canadian Arctic) nor Métis (descendants of First Nation people who married Europeans). Often used in the plural in the collective sense, as in a program for First Nations youth. The term is widely used in Canada but is not used in the US, except in connection with Métis whose homelands include northwest Minnesota, North Dakota, or other northern states.

Native American: Use if requested by specific tribes or parks.

Tribal name: Use specific tribal name(s) whenever possible, accurate, and appropriate. Also, the preference is to use the singular noun, for example, Navajo, Lakota, and Tlingit.

Inuit or Eskimo: Which Name to Use?
Alaska Native Language Center │ University of Alaska Fairbanks
The term "Eskimo" is now considered unacceptable to most Alaska Natives. The appropriate term to use today is Inuit.

Our Home on Native Land
Native Land Digital
A resource to learn more about the tribal nations who occupied the land historically and today.

Indigenous Languages of Alaska
National Park Service
There are at least 20 distinct indigenous languages in Alaska. Learn some phrases in Iñupiaq.

Taíno Language Influence
The Library of Congress
Taínos, the Native people of Boriken now known as Puerto Rico, influenced the culture and language spoken on the island.

Our Food is Our Way of Life
National Park Service
The Tlingit Tribe of now-occupied Alaska believes stewardship of its homeland is an ongoing, respectful interaction with all of its resources. This is how ecological balance is maintained.

Taíno: The Native people of the Caribbean
The Smithsonian
Celebrate Taíno culture and their influence on Haiti, Cuba, Jamaica, the Dominican Republic, and Puerto Rico.

Blackhorse v. Pro-Football, Inc.
The U.S. Trademark Trial and Appeal Board
This case decided that Washington D.C.'s professional football team's name and mascot are disparaging and canceled their trademark protection.

Violence Against Women Reauthorization Act of 2019
The Department of Justice
Through this act, tribes have greater power to address the missing and murdered indigenous women in their communities.

Why Treaties are Important

NPR
Understand the importance of treaties and why they matter to everyone today (NPR, 2017) (Duration 5:20).

Stetson Law Advocate Spotlight: Professor Candace Zierdt
Stetson University College of Law
Professor Candace Zierdt has served as Committee Liason with American Indian Tribes and Nations since 2002 as a member of the National Conference of Commissioners on Uniform State Laws. She is on the joint editorial board for Tribal Code Development as an NCCUSL member, and a member of the task force for the implementation of the Model Tribe Secured Transactions Act.

Why We Serve: Native Americans in the United States Armed Forces
National Museum of the American Indian | The Smithsonian
This exhibit highlights the legacy of Native Americans who served in the armed forces and demonstrates their commitment to protecting their homeland

The Temple Mound was built by Tampa and Saint Petersburg Natives, the Tocobaga Tribe. It is the largest remaining mound in the Tampa Bay region.

Visit the free education center and explore the exhibits on the history and life of the Native American community that called Weedon Island home.

The James Museum of Western & Wildlife Art is a museum that highlights Native American life, art, and jewelry.