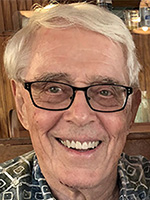 Richard O. “Dick” Jacobs is a 1967 graduate of Stetson Law. Prior to attending law school, he spent nearly a decade building a highly successful career in the life insurance business. That experience shaped his early legal career as a tax attorney. He co-founded a law firm that grew to about 100 lawyers, with offices in Tampa, St. Pete and Clearwater, and a satellite office in London. He served as Chair of the Tax Section of The Florida Bar.

In the late 1970s, clients asked him to join them in forming Park Bank of Florida. The bank grew fast and became a public company. When it began to flounder, Jacobs took over as CEO of the bank in hopes of righting the ship. His efforts were for naught, and the bank failed in 1986. It was the biggest learning experience of his life, and his book, Crash Landing: How to Survive a Business Crisis, was born of his efforts to understand how a well-meaning professional could fail.

Jacobs came to realize there was more to life than work and began pursuing new projects in venture travel and environmental conservation. His journeys, which took him to the seven continents, are what Jacobs would later call “dirty hands, wet feet” experiences that opened his eyes to how much of the rest of the world lived. In 2015, he published Wonderlust, a book of his photography and lessons learned from crisscrossing the globe.

His conservation work brought Dick back to Stetson Law for many fruitful collaborations. In 2016, he and his wife created the Dick and Joan Jacobs' Environmental Law Externship Fund to provide financial assistance for students to pursue the “dirty hands, wet feet” experiences. This year he launched The Stetson Environmental Tax Policy Writing Competition for students to develop innovative tax law policies to fund solutions for sea level rise.

Amidst all his traveling and philanthropic work, Jacobs had returned to practicing law with Holland & Knight, then Trenam Kemker with a focus on health care law. He was editor and prime author of Health Care Law - Mergers and Acquisitions of Physician Practices and was ultimately named to Best Lawyers in America and a Florida Super Lawyer for his work in this area.

He went Of Counsel at Trenam in 2011 at the age of 80 and retired fully in 2013. Characteristically, Jacobs retirement lasted only two years. In 2015, he reunited with several attorneys from his original firm at Johnson Pope Bokor Ruppel & Burns, LLP, where he remains on staff as Senior Counsel.

Jacobs latest book, Democracy of Dollars, is slated to be released in January. His vision for Stetson Law continues to expand, with the creation of a Center for Environmental Justice underway. It will provide students an opportunity to help architect environmental policies. 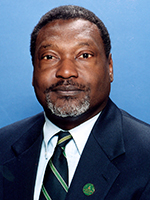 Mosley spent his early professional career in various librarian roles before becoming director of the library at Florida Community College in Avon Park from 1982 to 1989.

He was an active member of the community, serving two years on the Avon Park City Council before moving to St. Petersburg to attend Stetson Law, where he earned the best speaker award in his research and writing section. He joined the Stetson Law staff after graduation in 1993, serving as reference librarian and associate director before being appointed library director in February 2001.

Mosley remained heavily engaged in professional and civic organizations. He served as co-chair of the St. Petersburg’s Citizens Review Committee for the Police Department, and the parliamentarian of the city’s African-American Voter Education Committee. He was an active member of the American Library Association and the ALA’s Black Caucus; the American Association of Law Libraries and the AALL’s Southeastern Chapter; the Florida Library Association; the Association of College and Research Libraries; the Pinellas Public Library Cooperative; The Florida Bar; and the National Bar Association.

Mosley’s most prolific work was as an executive board member of the Florida Library Association, also known as FLA. He was named to the organization’s Transformers Honor Roll in 1996 for his efforts to improve the quality of service to library users. He served as president from 1999 to 2000. He championed plans to establish a Spouse or Partner category for annual conference registration, moved to establish a standing committee on leadership development, and recognized the need for electronic access to FLA information. He tried to visit every Friends of the Library group he could reach to encourage their participation and support.

Mosley was considered a leader in the field who made significant contributions to libraries and librarianship. He mentored many students and other librarians throughout his service to Stetson, the community, and the profession. Mosley continued these efforts and his service as library director until his unexpected and untimely death on March 29, 2005, at the age of 55.