Develop a passion for music production with our 8 Week Music workshop "The Passionate Producer's Music Production Workshop." Which is a course designed and instructed by multi-platinum, Grammy-nominated producer/engineer Jeff "Madjefmusic" Taylor.

This course is designed to quickly immerse you in music technology and fast-forward your journey as a producer. You'll spend time establishing a strong foundation in the fundamentals of music production, as well as learn how to record vocalists, build your project, mix and sample, as well as sound design, composition and structure basics, demonstrated using industry-standard DAWs (Digital Audio Workstations) Ableton Live, Logic Audio and Pro Tools.

This is sure to be an Information packed session that will seek to develop the creative Platinum Producer in you.

Using Ableton Live Suite I will begin the process of introducing how Software Sequencers are used in modern-day production with hands-on opportunities by students.

We will review reverb, delay and the other effects used in modern music understanding the when, where and why of their purpose.

Using live microphones, we will record sounds to be manipulated for a variety of different uses.

We will be the process of learning to record vocalists. We will have a guest vocalist and the opportunity for lots of hands-on.

We look at the process of adding sounds, samples and effects to build our composition into a full-blown production.

We will use the effects, and EQ and Dynamics plus vocals and instruments and bring them to a polished and final mix.

Jeff Taylor is a very well known Producer, Musician, Engineer, Author, Director, Beat Maker and more. His career spans 28 years in music production with album credits on a number of very successful mega artists as a producer, engineer, musician, mixer and drum programmer. Jeff has been instrumental in the creation of music trends and original music products, leading many teams in areas including production, app development and software development, as well as the development of Enhanced DVDs and more. Jeff is also an accomplished author and publisher with four industry-related Ebooks currently on the market. 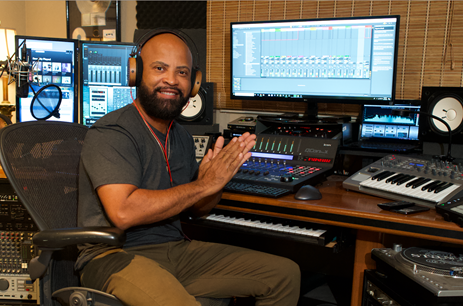 Jeff holds a place in music history as a member of the Legendary Flyte Tyme Productions Team. Led by Producers to the Stars, “Jimmy Jam & Terry Lewis” who have been inducted into the “R&B Music Hall of Fame”.

"This is essentially the most effective and respected R&B music production outfit to ever exist”, ...Vibe Magazine.

With multiple RIAA Gold and Platinum Certifications and Grammy Nominations, Jeff has amassed experiences that very few earn in a lifetime. As a freelance producer, engineer, musician, entrepreneur, he continues to make contributions to projects of all types enjoyed by audiences worldwide.

Jeff has expanded his interests in recent years to include live music, live sports broadcasts and more as Director of Broadcasting at Stetson University working in conjunction with the ASUN Sports Conference and ESPN to live stream College Sports. Jeff has excelled at producing live events with over 400 successful live streamed events in the past five years. He is a natural leader and teacher of young people.

"He is a man of great passion, a creative thinker with a heart of gold, great ears and eye's for music creation and video production." jam&lewis