Roellke to visit campuses in November 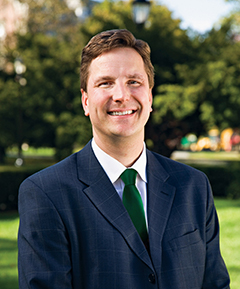 On Wednesday, Oct. 30, 2019, the Stetson University Board of Trustees announced it had elected Christopher F. Roellke, PhD, currently Dean of the College Emeritus and Professor of Education at Vassar College, to become the 10th president of Stetson University, effective July 1, 2020.

Roellke is widely regarded as an exceptionally effective and collaborative higher education leader who is past president for the Association of Education Finance and Policy, a 2014 Fulbright Scholar and the founder and fundraiser of Vassar College's Urban Education Initiative.

Roellke will succeed Wendy B. Libby, PhD, who has served as Stetson University's president since July 2009. Libby announced her retirement in February 2019 and will continue her position until June 30, 2020.

"The Board of Trustees has unanimously elected Dr. Roellke to lead Stetson into the future as our university's 10th president," said Joe Cooper, chair. "The board's presidential search framework and process brought forth many highly qualified candidates, and we thank them all. Dr. Roellke is bringing an outstanding record of energetic leadership in higher education and a deep understanding of the challenges and opportunities Stetson University faces. The board is thrilled to welcome him as president-elect."

"It is the greatest honor and privilege of my professional life to be selected as Stetson University's 10th president," said Roellke. "For nearly a century and a half, Stetson has been widely admired for its deep commitment to the traditions of liberal learning and globally engaged citizenship. My family and I are eager to immerse ourselves in this wonderful community of lifelong learners. Moving forward collaboratively with all of Stetson's constituents, we are committed to preserving and enhancing this extraordinary form of education for generations to come."

A graduate of Cornell University and Wesleyan University, Roellke has served three presidents at Vassar College. As Dean of the College, he was one of three tenured faculty members on the President's Senior Leadership Team and oversaw the Dean of Studies, Dean of Students, Campus Life and Diversity, Career Development, portions of Equal Opportunity/Affirmative Action/Title IX, Accessibility and Educational Opportunity, Safety and Security, and Campus Activities.

He has worked with senior leadership and the Vassar community in the development of its strategic budgeting priorities and oversaw international partnerships and exchanges, including Vassar's junior year abroad programs in Europe, Russia and Costa Rica. An American Council on Education Fellow, Roellke has also served as a visiting scholar at Yale Law School conducting research on school finance litigation. He has an upcoming book, the fourth in a co-edited series on research in education fiscal policy and practice with co-editor Jennifer King Rice, dean of the School of Education at the University of Maryland. The latest volume is focused on fiscal issues in American higher education and is due to be released in 2020.

"This is a wonderful appointment; Professor Roellke has tremendous skills and experience to take Stetson University to the next level, and we will miss him dearly here at Vassar. Our loss is Stetson's gain," said Elizabeth Howe Bradley, PhD, Vassar College President.

"Chris is an experienced educator who is ready to lead during these challenging times," said Catherine Bond Hill, who was Vassar president, 2006-2017. “He is liked and respected, insightful and caring, and I really valued having him as part of my senior team. Chris has tremendous energy and great optimism for the future of American higher education. I am pleased for both Chris and for Stetson University.”

Roellke's election by the Board of Trustees follows an extensive presidential search that drew a large and competitive group of candidates. The process began with community forums that allowed the committee to hear from students, faculty, staff, alumni, trustees and friends of the university about the qualities they were looking for in Stetson's 10th president as well as the challenges and opportunities they see before Stetson in the coming years. The committee's work, which included several exhaustive interviews with top candidates, spanned several months and, near the end of the process, various constituent groups met confidentially with final candidates on campus in formal and informal settings. Members of these broadly representative constituent groups then provided feedback to the search committee, which in turn fulfilled its charge to recommend the candidate best qualified to lead, inspire and shape the future of Stetson University.

"Chris is notable because of his passion and dedication to teaching and students," said Maureen Breakiron-Evans, Board of Trustees chair-elect. "He is very student-oriented and authentic with a commitment to building and enhancing academic environments to foster deep faculty-student connections and community engagement. I look forward to working with him and the university during this transition."

A dedicated fundraiser, Roellke has secured donations for major Vassar campus life and renovation projects, career development and local community outreach programs. He directly oversaw several major campus life construction and renovation projects including the $8 million renewal of the central dining facility to better serve the needs of students and faculty. He has successfully solicited grants from the Dyson Foundation, Mellon Foundation, Arthur Vining Davis Foundation, and Metropolitan Life and Economic Policy Institute, and helped to create outreach and support for alumni and parents.

Roellke's wife, Kim, is a veterinarian and they have three daughters, Emma, Julia and Olivia. President-elect Roellke and his wife will be introduced to the Stetson communities during welcome ceremonies in both DeLand and Gulfport later next month.